Chronic obstructive pulmonary disease (COPD) is the third highest cause of death in the United States and many other countries. This inflammatory lung condition makes it difficult to breathe, and COPD is often associated with other health problems such as heart disease and cancer. Though COPD is treatable, it can cause serious problems if you do not seek medical help as soon as possible. Therefore, it is very important to know whether your cough may just be a minor cold or a symptom of COPD.

What Are the Main Symptoms of COPD?

The symptoms of COPD may vary slightly depending on the precise variant that you have. The two most common types of COPD are emphysema and chronic bronchitis, but there are many other types that a person may have. All of these lung diseases make it hard to breathe, so they frequently cause chronic coughing, which is the most common sign of COPD in the early stages.

The bronchitis form of COPD is also associated with excessive mucus production, while emphysema normally just causes wheezing. People with COPD may have short breaths even without doing any physical activity, and they may experience wheezing or sensations of tightness in the chest.

As COPD progresses, patients start to have trouble getting enough oxygen. This may be happening to you if your lips or fingernails look blue and you constantly feel lethargic and tired.

What Illnesses Are Mistaken for COPD?

In the early stages of COPD, patients may be misdiagnosed with the flu, a common cold, a basic respiratory infection, or pneumonia. All of these illnesses are respiratory conditions, so they have similar symptoms. A patient who has any of these conditions may frequently cough. Therefore, doctors often find it difficult to pinpoint the underlying cause of a cough.

Things can get even more confusing because patients with COPD have a weakened immune system due to their lack of oxygen. This means that you can have a cold or other respiratory infection while also having COPD.

How Is COPD Different Than Other Respiratory Illnesses?

COPD is different from basic respiratory illnesses because it is actually caused by damage to the lungs, not just an infection or inflammation. Illnesses like the flu or the common cold only affect the upper airways, making it difficult to breathe out of the nasal passageways and throat. Pneumonia can infect the lungs, but it is different from COPD because it causes fluid to build up in the lungs. All of these issues can cause coughing because your body is trying to clear up airways.

Though coughing also happens among patients with COPD, it happens because the bronchial tubes or the alveoli sacs of the lungs are damaged and malfunctioning. Unlike other illnesses, COPD is progressive which means that it gradually gets worse. Instead of clearing up over time, you will just notice more and more symptoms occurring.

Can You Tell If a Cough Is Caused by COPD?

One simple cough is normally not enough to figure out what is wrong. Instead, you may have to wait a few weeks and keep an eye on your cough to tell if it is caused by COPD or just the common cold. A cough is only considered to be a chronic cough if it is a daily occurrence for at least three months. Normally, a cough caused by other more common illnesses will clear up quickly.

If you are coughing a lot, you should see if you are having any of the symptoms associated with COPD progression. Signs of low oxygen, such as blue lips or sensations of fatigue, are normally a sign that your cough is caused by COPD. If your cough will not go away or if you are experiencing other COPD symptoms, you should talk to your doctor about possibly having COPD.

How to Tell If You May Have COPD

If you say yes to one or more of the following questions, it is very possible that you may have COPD.

If you suspect that you might have COPD, you can talk to your doctor about getting certain medical tests. These diagnostic tools will help to determine if your coughing and other symptoms is due to COPD or another issue. 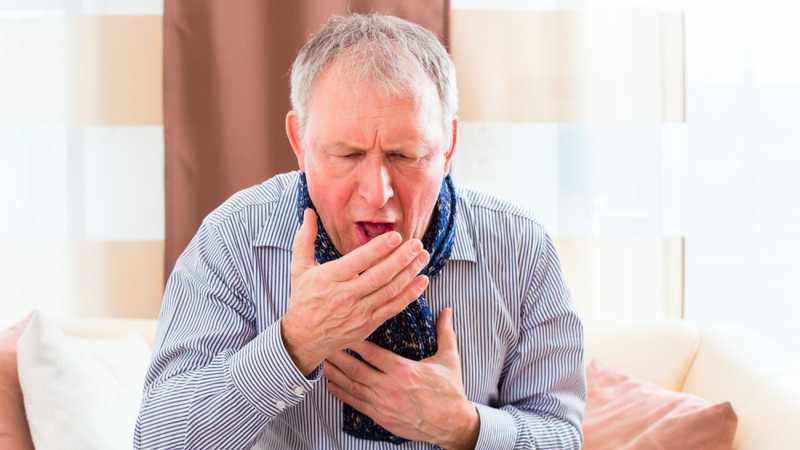