For 2018, one automaker has perfected power, agility, and precision: Lincoln. The 2018 Lincoln lineup, the company’s best yet, features upgraded versions of the following Lincoln SUVs:

The six-speed SelectShift transmission allows you to control the stick, with the convenience of operating an automatic transmission. Wheel-mounted paddle shifters ensure seamless gear movement to make the SUV perfect for climbing and descending hilly terrain. Adaptive cruise control senses traffic slowing down in front of you, and the system automatically adjusts speed to account for the traffic flow change.

Proprietary Lane-Keeping System deploys a camera mounted on the windshield rearview mirror to assess and monitor road markings. Any movement out of your lane is met with an alert issued by the instrument cluster display. Sync plus Apple CarPlay Compatibility represents a convenient to use, responsive voice-activated communication system. You use Siri to interact with your iPhone to access voice mail and download your favorite tunes. Apple Maps presents accurate turn-by-turn instructions, as well as real time traffic conditions and estimated travel times.

The 2018 Lincoln MKC achieves 21 mpg fuel efficiency in the city and 28 mpg over the open road. Early reviews of the 2018 Lincoln praise the quality of the materials used to design the interior. The Sync3 system offers superior infotainment and the engine generates more power than most competing SUV brands. Some reviewers do not like the cramped back seat and the lack of advanced safety features.

Lincoln has included several features for the 2018 Lincoln MKX that the automotive company also uses in the three other styles of SUVs. This includes the six-speed automatic transmission that operates similar to a manual transmission. The 3.7-liter V6 engine generates 303 horsepower and 278 pounds-feet of torque. Both numbers are nearly identical to what you find with the performance of the 2018 MKC.

The 2018 Lincoln MKX hits a home run by offering cutting edge safety features that not only keep you and your family safe, but also help lower your car insurance bills. Advancetrac with RSC Electronic Stability Control and Roll Stability Control keeps the SUV balanced over the most rugged terrain. Rear parking sensors prevent fender benders in crowded parking lots and when you back the vehicle into the garage. Driver and passenger knee airbags protect the part of the body often neglected by other automakers.

With 10 speakers strategically located within the 2018 MKX, you enjoy surround sound audio quality from SiriusXM radio. Wireless streaming downloads flawlessly to ensure you enjoy your favorite songs and shows. Bluetooth wireless phone connectivity keeps you in touch with colleagues and loved ones. The 2018 Lincoln MKX includes the Sync3 system which offers improved voice recognition software and an eight-inch LCD capacitive touchscreen.

One of the few negatives for the 2018 MKX is the below average fuel efficiency of 16 mpg in the city and 23 mpg for highway driving. However, the enhanced entertainment system receives high praise from both print and online automotive publications. The 2018 Lincoln MKX also enjoys high initial ratings from reviewers who love the increase in power.

Blind Spot Information System (BLIS) represents a proprietary safety feature that alerts drivers of crossing traffic. The system works for drivers backing out of a driveway and drivers who want to merge into highway traffic. Advanetrac with Roll Stability Control now includes Curve Control to prevent vehicle rolls around sharp turns in the road.

Lincoln’s Sync3 entertainment system has improved on the options available with previous year models. The system now operates more like an infotainment system. Interaction with your smartphone allows you to stay in touch with professional colleagues and family members.

The 2018 Lincoln MKT gets 15 mpg in the city and 21 mpg over highways and interstates. Early reviews praise the economical increase in engine power, as well as the integration of smartphone technology into the Sync3 infotainment system. The 2018 version of the MKT has more legroom than the legroom provided by the 2017 model. Storage appears to be a negative, as the 2018 MKT has only 80 cubic feet of storage space.

The twin turbocharged 3.5-liter engine under the hood of the 2018 Lincoln Navigator cranks out 450 horsepower and generates 510 pounds-feet of torque. Record torque and horsepower give 2018 Navigator owners the capability to haul loads weighing up to 9,000 pounds.

As an upgraded version of the 2017 Navigator, the much anticipated 2018 model engine includes 100 percent electronic control and dual-point fuel injection. The 10-speed SelectShift automatic transmission is also a performance milestone for the Navigator. 10 independently operated gear shift points allows drivers to navigate over all types of terrain. Adaptive suspension offers six Lincoln Drive Modes to diminish the rough and tumble effect undulating terrain has on vehicle balance.

Lincoln Connect features a 4G LTE Wi-Fi hotspot, which connects up to 10 devices at the same time from inside of the 2018 Navigator or 40 feet away. The Revel Ultima audio system reproduces live music to make it seem like you have a front row seat at a concert. 20 speakers pump out music like it was meant to be heard during live studio recording sessions.

The 2018 Lincoln Navigator includes Head-Up Display, a recently unveiled safety feature that presents information for drivers as to what lies ahead around the next corner. Experience the power of 360-degree vision, as four cameras mounted on the front, rear, and sides of the 2018 Lincoln Navigator merge images to present a complete view around the SUV. The 180-degree roving split-view camera located within the front grille monitors cross-traffic.

Automotive reviewers love the comfort of driving the 2018 Lincoln Navigator over any type of road surface. The 2018 Navigator provides more cargo space than the cargo storage capacity offered by competitors. Some early reviews mention the four-wheel drive option for the four trims requires changes to better handle tough road conditions. The lack of smartphone integration, which is an option for the other three 2018 Lincoln SUVs, is also a negative for the 2018 Navigator. 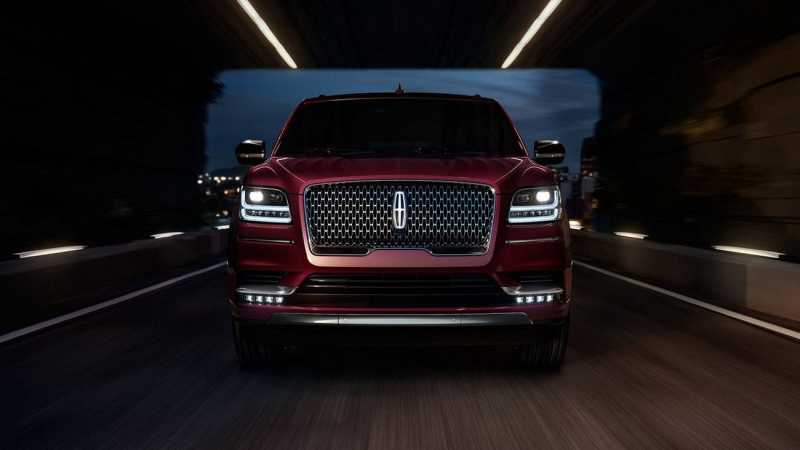