Hatchbacks combine the comfort of a modern sedan with a smaller overall design, making it handy for a variety of scenarios. Here are five of the best hatchback models of 2017.

If you’re looking for something compact and sporty, look no further than the Mitsubishi Mirage. It’s a sleek and powerful hatchback with excellent fuel economy. The Mirage gets 78 horsepower, with 74 lb-ft of torque.

The Mitsubishi Mirage has a five-speed manual transmission, with electric power assist steering. You can comfortably seat up to 4 adult passengers in the cushy interior. It has good fuel economy and comes with modern safety features, such as the Anti-Lock braking system.

The Mirage has a tall shape with accent lines that are angled through the car's steep sides. The nose of the 2017 model has also been restyled. The vehicle has a combined fuel economy of 39 mpg. The car has been modified to provide better fuel consumption, especially with the continuously variable transmission (CVT) that comes equipped.

The Mitsubishi Mirage is a car you will enjoy driving around town. It has a good fuel economy, a stylish exterior and plenty of space. However, the car is slow and noisy, and is harder to control at high speeds. The Mirage also doesn’t have great safety scores. If those factors don’t matter to you as much, then the Mitsubishi Mirage can be your car for around £10,480- £13,706.

The 2017 Chevrolet Spark is one of the best hatchbacks you should consider buying for cruising around London. It is a front wheel drive, and has 98 horsepower. The car has a 1.4 liter, four-cylinder engine.

The 2017 Spark's interiors have conventional instruments. It also has a standard 7-inch touchscreen at the center of its dashboard. The 4-cylinder engine is either paired with an optional continuously variable transmission (CVT), or a standard five-speed manual gearbox. It has good fuel economy, with a city consumption rate of 23 mpg and highway consumption rate of 44 mpg.

The 2017 Spark also offers several active safety systems. It comes with power windows and air conditioning for the 2LT. On the other hand, the 1LT has remote less key entry and sophisticated steering wheel audio controls. In addition to the operational upgrades, this car also has a 4G LTE Wi-Fi hotspot.

The Chevrolet Spark is surprisingly spacious and comes at an incredible value. It comes fitted with safety systems like the theft-deterrent systems. The car has two options for transmissions and quite the spacious cargo area. It also has an interior that is fashionable, and user-friendly.

The 2017 Volkswagen Golf is yet another hatchback you should consider owning. It has a 1.8 liter, 4-cylinder engine. The Golf also has two transmissions, a 5-speed manual, or the OD. The vehicle gets 170 horsepower, and 184 lb-ft torque.

The 2017 Golf is a front-wheel drive vehicle. It has air conditioning and manual climate control. You also get to enjoy remote keyless entry, and it has driver and passenger lumbar support. The car runs on 17-inch wheels and has excellent stability.

The 2017 Golf has a good steering weight when you increase speed. The steering weight gives you accurate feedback about the performance of the car, striking an all-around balance for ease of use. The Golf has cargo versatility, a decent fuel economy, and an impressive refinement.

On the other hand, the 2017 top-end models are a little pricey. You may also find the car's handling a little off because of the automated-manual transmissions. It also has thick rear roof pillars, which block the corner views.

2017 Ford Focus
You can also opt for the 2017 Ford Focus. The Ford Focus has a fuel economy of 26 mpg for city and 38 mpg for highway. The 2017 model has a European-developed chassis that will enhance your enjoyment of the car.

The 2017 Ford Focus has great gas mileage that also gives you sporty handling. The car is smooth and quiet on the road. Also, it is an inexpensive base model with an MSRP of £13,468. The car also has the MyKey feature that helps to limit its top speed, while also providing a low fuel warning.

On the other hand, the car has basic degree performance. It also has lesser room in the backseat and does not have forward collision warning. Safety should be one of the priorities you consider when purchasing a car, so this may deter you.

2017 Hyundai Elantra GT
The 2017 Elantra GT is rated as one of the best hatchbacks of 2017. Get to know it’s features before you decide if it’s the right car for you. The Hyundai has a fuel tank capacity of 13.2 gals, and a combined fuel economy of 27 mpg for both manual and automatic transmissions.

The GT has a 2.0 liter, 4-cylinder engine, with 173 horsepower and 154 torque. Its fuel system is standard Gasoline Direct Injection (GDI). The GT is a standard front wheel drive that comes with a 6- speed manual transmission. You can acquire the Hyundai Elantra GT for as low as £16,129.

The GT has a sporty feel and comes with bold driving and handling characteristics. The vehicle also has a panoramic sunroof which adds excellence to its look, and it gives you quite the impressive features for the price you pay. Moreover, it has a logical control interface, and is a simple and refined car.

On the downside, the 2017 Hyundai Elantra GT has minimal space in its backseat, which causes cramping. Its engine does get noisier when you accelerate, too.

In the category of hatchbacks, the Audi A3 (starting at £21,810) is a fairly powerful option. Boasting two available variations of Audi's popular 2.0-liter engine, the 2017 A3 ranges in horsepower from 186 to 220. Both front-wheel and all-wheel drive configurations are available. Fuel economy varies based on the precise trim and package you get. In-city mileages range from 21 to 26 mpg, while highway mileage ranges from 28 to 35 mpg.

The standard features of a 2017 Audi A3 are substantial, and even more features are available as options. Included in base A3s are a 10-speaker sound system, USB and Bluetooth connectivity options, anti-lock brakes, and a rear camera. Some of the optional upgrades include an impressive 14-speaker sound system, lane assist technology and compatibility with both Andriod Auto and Apple CarPlay. All 2017 Audi A3s include a seven-inch touchscreen controller.

The pros of the 2017 Audi A3 are heavily centered on its large array of available technology features. When it comes to getting the most out of automotive technology at a fairly reasonable price point, the A3 is a tough hatchback to beat. If you like great infotainment features, you'll likely enjoy the A3. For audiophiles, the optional 14-speaker sound system is a major selling point. With up to 220 horsepower, the vehicle is also fun to drive.

The weakest point of the A3 is its gas mileage, which is a bit low compared to several of its competitors. Another con is the fact that the back seat is fairly cramped, especially for larger passengers. If you're mostly driving younger children in your back seat, this point won't matter as much. If your backseat passengers are fully-grown children or other adults, though, the 2017 Audi A3 may not be the most comfortable ride for them.

Starting at £17,000, the 2017 Hyundai i30 has several different engine options available, from a 1.0-liter engine that puts out 108 horsepower to a 2.0-liter size capable of producing 271 horsepower. The different engine formats include both diesel and gasoline-powered versions. Fuel economy varies based on the engine type a particular vehicle is equipped with, but even the least fuel-efficient options stand out as being quite easy on fuel. Mileage ratings for the 2017 Hyundai i30 start at 39 mpg, with the most efficient models getting up to 74 mpg on the highway.

The i30's interior is somewhat sparse, yet at the same time rather luxurious. The space inside this hatchback model is laid out to make it roomy and efficient. Inside the dash, you'll find a USB port, as well as two 12V charging outlets for your devices. Higher trims also include a charging pad for smartphones, a feature which can prove to be very convenient. At the core of the car's infotainment system is an eight-inch touchscreen control panel.

If you like modern design and great fuel efficiency, the 2017 Hyundai i30 has a lot to offer. The smaller engine options are a bit low on power, but their larger counterparts are fairly responsive. The car's general interior spaciousness is also a major advantage, especially if you take long trips on a regular or semi-regular basis.

On the downside of the 2017 i30, the car is less well-appointed in terms of infotainment features than many of its competitors. The hatchback itself is also a bit small, making it somewhat awkward to get larger pieces of cargo easily into the rear of the vehicle. 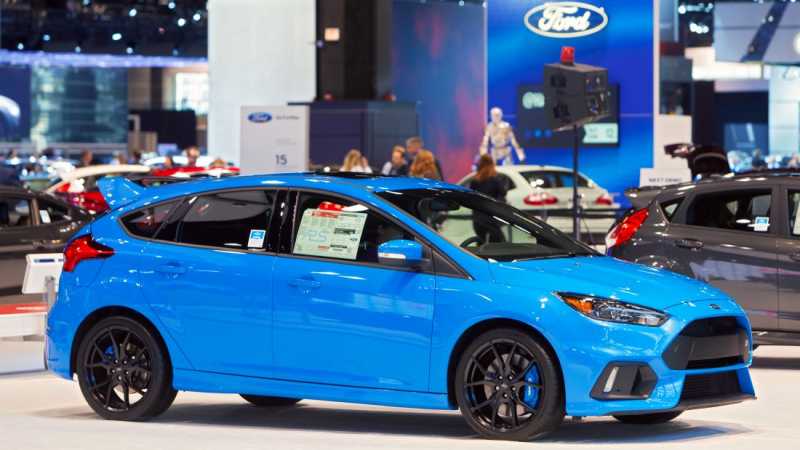