Breaking Down the 2017 Mazda Sedan Lineup

Mazda has earned a reputation for engineering sedans that are remarkably fun to drive. Both the compact Mazda 3 and the midsize Mazda 6 promise to deliver an engaging driving experience. However, these sporty sedans bring more to the table than just impressive performance capabilities. They both come loaded with an outstanding number of value-packed features.

With a starting MSRP of $17,845, the new Mazda 3 proves to be an outstanding bargain. While the Mazda 6 demands a bit more money, very few car shoppers will complain about its $21,945 price tag. If you’re looking for more information, we’ll be breaking down the 2017 Mazda sedan lineup below!

For drivers on a tight budget, the base four-cylinder engine will prove to be a great choice. Mazda tweaked it to produce 155 horsepower and 150 pound-feet of torque. If you hunger for more performance, step up to the larger four-cylinder engine. This 2.5L engine produces a mean 184 horsepower and 185 pound-feet of torque. When launched from a dead stop, the Mazda 3 can reach 60 mph in a brisk 7.2 seconds, ranking it among the quickest compact sedans in its class.

All variants of the 2017 Mazda 3 benefit from Mazda’s highly acclaimed SkyActiv performance technology which helps the sedan work as efficiently as possible. With the ability to return 28 mpg in the city and 37 mpg on the freeway, the base engine is especially good on gas. However, even the stronger 2.5L engine can offers 33 combined mpg. Both the available engines are tuned to develop full power using regular unleaded fuel.

While behind the wheel of the Mazda 3, you’ll grow to appreciate its sporty driving dynamics. Many people consider it to be today’s the best-handling compact sedan. A new G-Vectoring Control system now comes standard. The Mazda 3 hugs the road more like a sports sedan opposed to a basic commuter car. While the six-speed automatic transmission is smooth, some drivers will like the manual transmission’s sporty feel.

A five-star safety rating gives car shoppers one more reason to choose the new Mazda 3. It scored high marks in all the most important crash tests. Mazda also offers some useful safety innovations for the new 3. When changing lanes on the interstate, the blind-spot monitor will keep you out of trouble. The i-Activsense package also includes safety advancements such as automatic braking and lane departure intervention.

Even if you stick with the base Mazda 3, you will be rewarded with a lengthy list of standard entertainment features. A useful control knob makes the touch-screen interface easier to use than most competing systems. Some of the other standard tech includes Bluetooth connectivity, dual USB ports, and HD radio. A Bose surround-sound audio system is optional on the mid-level Touring trim. Atop the lineup sits the luxurious Mazda 3 Grand Touring. It is the only trim that comes equipped with a digital speedometer and a head-up display.

The 2017 Mazda 3 faces off against popular cars such as the 2017 Honda Civic and the 2017 Toyota Corolla. In comparison to the Toyota Corolla, the Mazda 3 offers significantly more performance. Although the Honda Civic is roomier and more efficient, some of its interior features aren’t quite up to par. For example, some users have complained about Honda’s less intuitive infotainment system.

Every version of the 2017 Mazda 6 comes strapped with the same four-cylinder engine. It pushes out a competitive 184 horsepower and 185 pound-feet of torque. While many of the Mazda 6’s rivals can be upgraded with a more potent engine, it still feels quite strong in real-world driving conditions. Mazda’s SkyActiv technology certainly helps enhance performance. The sedan’s 0-60 time of 7.5 seconds proves that it has no trouble keeping up with the competition. As soon as you step on the accelerator, the Mazda 6 showcases its responsive nature.

Drivers will like the Mazda 6’s fuel-efficient design. Models equipped with a manual gearbox are rated to return an economical 24 mpg in town and up to 34 mpg on the highway. The optional automatic transmission is only slightly more efficient. Available as an option on the Grand Touring trim, Mazda's i-Eloop brake regeneration system promotes even better fuel economy. Mazda also recommends the use of regular gasoline, which will save you more money at the fuel pump.

The 2017 Mazda 6 is incredibly engaging to drive. Like the smaller Mazda 3, the Mazda 6 is perfect for daily commuting and out-of-town trips. It handles the road far better than the typical family sedan. Sharp steering and a sporty suspension enable drivers to obtain a direct connection to the road. Although the Mazda 6’s ride is somewhat stiffer than usual, it still manages to effectively soak up rough patches of pavement. Very few competitors offer such a pleasing blend of comfort and sportiness. Regardless of which transmission you choose, expect to be thoroughly impressed. Furthermore, a wide variety of different-sized drivers will find the Mazda 6 to be a comfortable fit.

Stamped with a five-star safety rating, the 2017 Mazda 6 promises to provide a secure atmosphere for your family. It also received Top Safety Pick+ credentials from the IIHS. To give drivers more protection in congested areas, Mazda equipped every trim with rear parking sensors. Autonomous braking and adaptive cruise control are just a couple of the advanced driving aids.

Some automotive critics consider the 2017 Mazda 6 to be the segment’s best overall value. It comes equipped with premium features that are often found in more expensive models. Not only is the Mazda Connect infotainment system straightforward and simple to navigate, but it also provides a tablet-like display. Connecting your smartphone to the interface only takes a few seconds. Some of the other standard niceties include a backup camera, hands-free text messaging, and Bluetooth. If you are a big music fan, the available Bose sound system will be hard to resist. Meanwhile, the innovative Traffic Sign Recognition feature gives you a greater sense of awareness on the road.

Key foes include the Toyota Camry and the Nissan Altima. Unlike these rival midsize sedans, the Mazda 6 continues to offer a traditional manual transmission. The Mazda 6’s superior handling will also win over a lot of drivers. All three of these sedans provide an impressive amount of interior room. 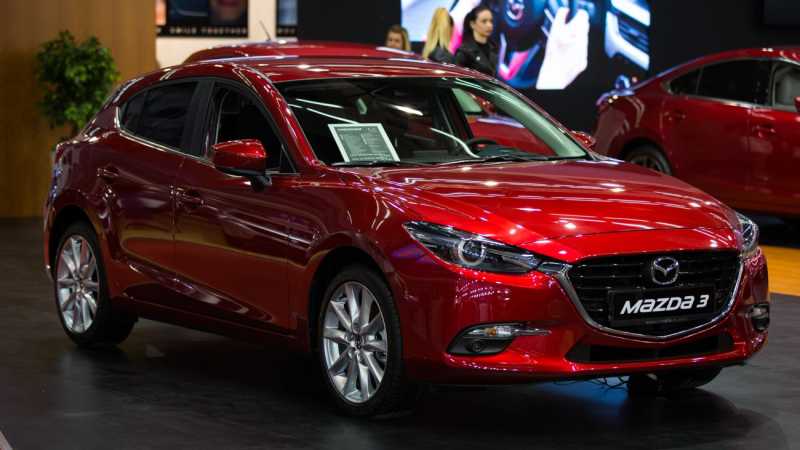