Crossover SUVs have nearly taken over the market. Because they have become so popular, some automakers have even planned to stop making sedans.

With so many new models hitting streets this year, you now have even more options to choose from. To help, here are five crossover SUVs that promise to make a big splash in 2019.

Strong fuel economy and a surprisingly roomy interior make the 2019 Cadillac XT4 ideal for everyday commuting. Powerful exterior styling gives you another reason to like this compact crossover. Signature LED headlamps and integrated exhaust outlets come standard throughout the lineup. With a starting price of $34,795, the new XT4 is more affordable than its European counterparts.

You shouldn’t have any complaints about the XT4’s performance. Under the hood sits a turbocharged four-cylinder engine, which pushes out a competitive 237 horsepower and 258 pound-feet of torque. A 3,500-pound maximum towing capacity adds to the XT4’s versatility. Fuel economy stands at 24 mpg in town and 30 mpg on the highway. Available with an adaptive suspension, the Sport trim is geared towards driving enthusiasts. Plus, all-wheel drive is available as an option.

Even the base XT4 comes loaded with great features like Cadillac’smuch-improvedd CUE interface with Apple CarPlay and Android Auto. Meanwhile, available massaging front seats spawn an especially relaxing ride. A head-up display is available as well. While there’s a lot to like about the new XT4, Cadillac forces you to pay extra for must-have safety technologies like automatic emergency braking and lane-keep assist.

If you’re an adventure seeker, don’t miss out on the 2019 Honda Passport. It’s specifically engineered for the drivers who enjoy an outdoor lifestyle. Although the all-new Passport rides on the same platform as the Honda Pilot, there’s no overlooking its more rugged design. Prices are expected to start at roughly $33,000.

All versions of the new Honda Pilot come equipped with a strong V6 engine. It’s rated to develop 280 horsepower and 262 pound-feet of torque. Despite hitting the mark in several key categories, some buyers may desire just a bit better fuel economy from the new Passport. Honda estimates a combined average of 22 mpg. You can certainly take the Passport on an off-road journey. Intelligent Traction Management and a torque-vectoring AWD system make it perfect for venturing down trails. Extra ground clearance also gives the Passport an advantage over the mechanically similar Honda Pilot.

Despite being made for weekend adventure, the 2019 Honda Passport also a more than worthy family vehicle. Although the base model is lightly equipped, the upper trims offer premium features like an upgraded 8.0-inch touchscreen and cooled front seats. Most importantly, every new Passport comes loaded with crash-avoidance technologies. In particular, Honda Sensing includes automatic emergency braking, active lane control, and adaptive cruise control.

After being off the market for more than a decade, the Chevrolet Blazer has finally made a comeback. It’s far different from the last generation. Instead of a boxy design, this midsize crossover now has an incredibly sleek and athletic appearance. A black mesh grille and 20-inch Dark Android wheels give the RS trim an especially sporty profile. To make the Blazer more appealing, Chevy gave it a reasonable MSRP of $28,000.

Two different engines are available for the 2019 Chevrolet Blazer. The standard power source is a fuel saver. Chevy’s EcoTec four-cylinder engine develops 193 horsepower while returning up to 27 mpg. Drivers who demand more excitement will ultimately want the available V6 engine. It pushes out a more enjoyable 305 horsepower and 269 pound-feet of torque. Although the new Blazer is not built to tackle rough terrain, an optional twin-clutch AWD system ensures a solid performance in the snow. If you plan to tow on a regular basis, take advantage of the available Hitch View camera.

On the inside, the new Blazer has an upscale feel. Cool HVAC vents give the interior a special touch. Most of the Blazer’s most popular features come standard. Chevy’s new Infotainment 3 interface is faster and more responsive than the old MyLink system. A 4G Wi-Fi hot spot is also found on every new Blazer. All the latest safety innovations are offered on the new Blazer as Teen Driver technology and a Rear Seat Reminder system come standard.

The BMW X5 has always been high on driving excitement. However, BMW built the redesigned 2019 model with an extra degree of refinement. It’s roomier and more comfortable for families. While the new X5 ranks among today’s best midsize luxury crossovers, it’s a bit more expensive than some rivals. Expect to spend at least $60,700.

You’ll appreciate the BMW X5’s responsive road manners. Featuring sports-tuned suspension dampers and rear-wheel steering, the optional Dynamic Handling package enables the X5 to carve corners like a legitimate sports car. Even the base turbocharged six-cylinder packs serious performance, which is rated to generate 335 horsepower and 330 pound-feet of torque. In terms of fuel efficiency, anticipate getting 20 mpg in the city and 26 mpg on the highway. Tuned to produce an exhilarating 456 horsepower and 479 pound-feet of torque, BMW’s available twin-turbo V8 engine transforms the X5 into a scorching performer. You’ll be able to reach 60 mph in a quick 4.6 seconds.

Although several lavish features are available for the 2019 BMW X5, plenty of luxuries come standard. Some of the highlights including a stunning 12.3-inch infotainment display, a customizable digital gauge cluster, and a 10-speaker sound system. To experience more relaxation on long road trips, opt for the upgraded multi-contour seats. BMW also equips the new X5 with a standard safety package. You’ll benefit from pedestrian detection, forward collision braking, and blind-spot monitoring. Available as an option, the adaptive laser headlights are engineered to provide superior visibility at night.

If you find the typical Lamborghini sports car to be a bit too impractical, look no further than the all-new 2019 Lamborghini Urus. It’s already being mentioned among the best high-performance crossover SUVs ever created. Futuristic styling enables the Urus to make a grand entrance. Unfortunately, this race-bred crossover is designed for high-income buyers. Prices start at a steep $200,000.

Motivating the new Urus is a twin-turbo V8 engine, which unleashes a mesmerizing 641 horsepower. A zero to 60 mph sprint of 3.4 seconds puts the Urus among the quickest crossovers in history. As expected, fuel economy is poor. Expect to get 12 mpg in the city and 17 mpg on the highway. Although the Urus offers unbelievable handling on the street, it’s also a skilled off-road machine.

The inside of the Urus focuses on establishing an exciting atmosphere for drivers. Jet-fighter controls and a flat-bottom steering wheel give the cabin the appearance of a classic Lamborghini sports car. While on the road, there are plenty of high-tech features to keep you entertained. A 1700-watt digital sound system and a dual-screen infotainment system come standard. Meanwhile, the available traffic management system makes driving in congestion less hectic. 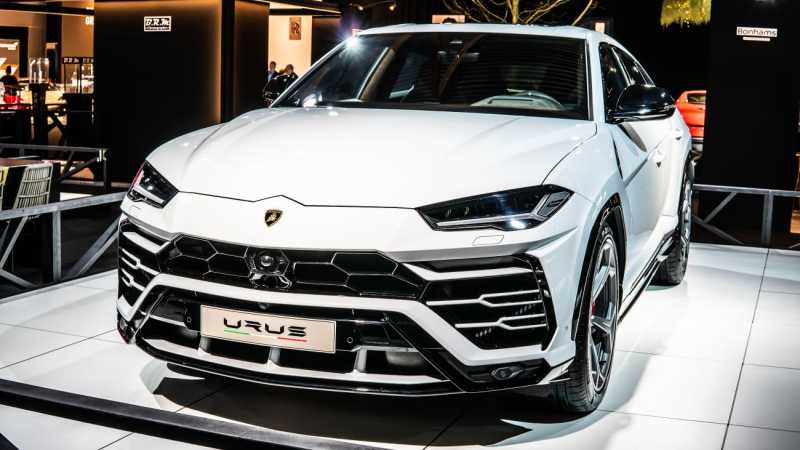