Ford has a smorgasbord of exciting vehicles to offer in its 2016 lineup. The best thing about buying a Ford model is that you know you will be getting the best in the industry. Ford has been providing the world with top-notch automobiles since it came to be in 1903. If you choose to buy a Ford, then you are choosing a small part of history.

The following are some of the vehicles in Ford’s 2016 lineup and some information about what is special about them. Choose one of these, and you will truly be a champion!

The starting price for the Ford Fiesta is a little more than $14,000. It is truly one of the most affordable vehicles that are available today. The model has some impressive space for something that looks so small, as well. You can expect to get five people inside of the vehicle. Additionally, they will have more than 25 cubic feet of room.

The unique features of this vehicle are plentiful, and include the SYNC 3 system, 4G LTE, SiriusXM, Bluetooth, Apple Audio System and Rearview Camera.

The Nissan Versa is in the same league as the Ford Fiesta, and it has the better pricing of the two models. The Fiesta also has the better fuel efficiency and a cuter design.

The Fiesta’s fuel efficiency is as good as any can get. The model gets up to 40 miles per gallon the highway, which is one of the highest fuel efficiency numbers of them all.

The positive things that consumers notated about the Ford Fiesta were the fuel efficiency, styling and price. The unfavorable items were the cargo space and the resale value.

If you’re looking for something that is a little bigger than the Fiesta, then you may consider the Taurus. The Taurus has an elegantly futuristic appeal, especially in black. That model has gone through many makeovers over the years, and its current face looks just fantastic.

You can get your hands on a Taurus with a bit more than $27,000. You will be pleased with the model if you are a consumer that is highly concerned about space. The Taurus has a five-person seating capacity and can hold 20 cubic feet of cargo. Furthermore, the passengers will be quite comfortable in the vehicle. They will receive 39 inches of head room in the front, 44 inches of leg room in the front, 55 inches of hip room and 56 inches of shoulder room.

The Taurus is full of technological and safety features. Its unique features include Adaptive Cruise Control, Lane Keeping System, Forward Collision Alert and Curve Control. A few of the technological features that you may find in this model are features such as MyFord Sync, Bluetooth, 4G LTE, Navigation and the MyKey feature.

The consumers who liked it liked it for its space and its looks. Reliability wasn’t on the top of the plus list, however.

If you are looking for a new pony, you don’t have to look much further that the Mustang. Ford keeps this classic favorite in play for the speed demons and muscle enthusiasts of the world.

Fortunately, the ‘stang does not have an expensive starting price. You can grab hold of one for not much more than $24,000. The specs on it are good. It seats up to four people and it offers adequate space. The headroom, shoulder room and leg room numbers are 37, 56 and 29 inches respectively in the front of the vehicle.

Features are plentiful on the Mustang. You will have access to tech features like SYNC 3, Shaker Pro Audio, Navigation, Blind Spot Detection, MagneRide Dampening system and more.

The Chevy Camaro and the Dodge Charger are just two of the vehicles that compete with the Mustang. The Mustang beat the Camaro as competition on grille style, suspension features and performance, so it fares very well.

Consumers who reviewed the Ford Mustang said they liked it because of its looks, comfort and nostalgia. The negative were about the rear seating abilities and the overall rear comfort.

Other notable models in the lineup are models such as the Ford Focus, Fusion, C-Max, Edge, Flex, Explorer and so many more. You will be happy in any one of the vehicles from the Ford lineup because you will know that they are all crafted with precision and safety in mind. 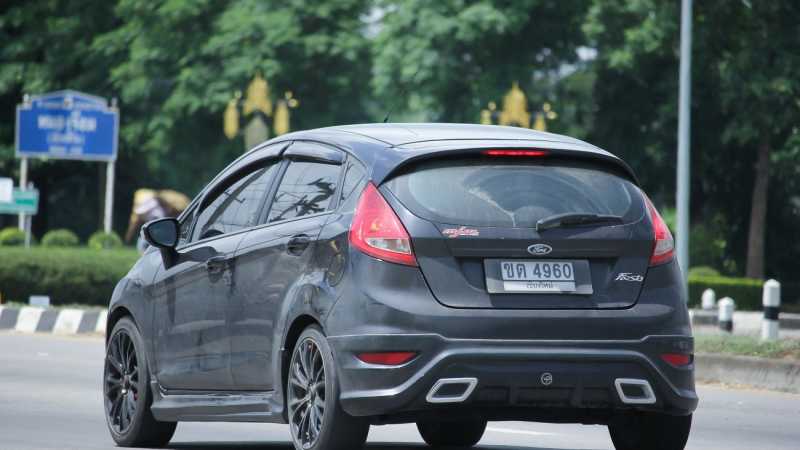