Inside the 2017 Dodge Durango

If you're looking for a spacious, beefy SUV that's equally suited to family road trips and outdoor adventures, the 2017 Dodge Durango may be just what you need. The larger cousin of the Jeep Grand Cherokee – with which it shares running gear, powertrains, and chassis parts – the Durango is a popular pick among midsize SUVs thanks to its blend of powerful engine options, aggressive styling, and versatility. With an MSRP starting at $29,995, the muscular Durango offers a lot to like, but is it right for you? Let's take a look at everything you need to know.

Other than the performance-oriented R/T, all Durango trim levels come standard with the venerable 3.6-liter Pentastar V6 rated at 293 horsepower and 260 pound-feet of torque. Standard on the R/T, and optional on lower trim levels, is the beefier 5.7-liter HEMI V8, which puts out a very respectable 360 horsepower and 390 pound-feet of torque. Both engines are mated exclusively to a smooth-shifting eight-speed automatic transmission, with rear-wheel and all-wheel drive options. Both the V6 and V8 are equipped with an automatic start-stop feature to conserve fuel, and the V8 also features cylinder deactivation.

Regardless of the engine you choose, you can expect plenty of power. The Durango boasts a very impressive 6,200 to 7,400 pounds of towing capacity, and performance is strong and assured with both the V6 and V8. Steering is relatively nimble for an SUV, with minimal body lean, and a smooth and sturdy ride. It certainly won't be confused for a sports car, but the Durango offers enough get-up-and-go to handle nearly any driving condition. If you're planning to venture off the beaten path, the R/T and Citadel trim levels offer an all-wheel drive package with a low-range transfer case for greater performance in adverse conditions.

Though it's hardly a hazard to drive, the 2017 Dodge Durango trails behind many of its class competitors in terms of safety and driver assists. The Durango managed a solid overall score of four stars out of five in National Highway Traffic Safety Administration crash testing, along with "Good" scores in most Insurance Institute for Highway Safety (IIHS) tests. However, the SUV mustered only a "Marginal" – the second-worst score available – in small-overlap front-impact tests. The Durango features forward collision warning, blind-spot monitoring, and automatic emergency braking systems as optional features, as well as a standard low-resolution backup camera.

When it comes to entertainment, the Durango's Uconnect infotainment system is among the best on the market. Unfortunately, lower trim levels feature a meager five-inch touchscreen interface standard. The much better 8.4-inch touchscreen comes standard on GT, Citadel, and R/T trims and is optional on other trim levels. Bluetooth connectivity is available on all trims, but audio streaming is standard only on the SXT Plus and above. Regardless, the infotainment system is powerful, responsive, and intuitive, and audio quality is generally excellent.

There are plenty of options to pick from when it comes to SUVs, and the 2017 Dodge Durango faces a number of proven competitors. If you're in the market for an SUV, take a peek at a couple of competing options and see how they stack up with the Durango.

After undergoing a recent redesign, the Honda Pilot has emerged as a premier choice in this segment. It features attractive, modern styling, and a strong safety record, earning an IIHS Top Safety Pick+ award in crash testing. It boasts an impressive range of features as well, with a standard multi-angle backup camera, 8.0-inch touchscreen, Apple CarPlay and Android Auto integration, and standard third-row seating. However, its $30,595 MSRP checks in at $600 more than the Durango, and the Pilot simply can't compete with the Durango's impressive powertrain options and extra 2,400 pounds of towing capacity.

With an MSRP starting at $31,660, the 2017 Ford Explorer is certainly more expensive than the Dodge Durango. It also feels overly large and somewhat sluggish by comparison despite a cabin that can feel slightly cramped for taller passengers. However, there's still a lot to love about the Explorer. Its cabin is exceptionally quiet and features quality materials, and it's very comfortable on both daily drives and long road trips. The Explorer also offers a whole host of powertrain options, allowing you to pick and choose the ideal vehicle for your needs.

Though it can't quite compete with more miserly four-cylinder competitors, the Dodge Durango remains reasonably efficient. The V6 Durango checks in at an estimated 19 mpg city, 26 mpg highway, and 21 mpg combined for rear-wheel-drive models, while all-wheel drive iterations dip to 18 mpg city and 25 mpg highway. The more powerful V8 models are unsurprisingly less efficient, mustering just 14 mpg during city driving, 22 mpg on the highway, and 17 mpg during mixed use. Both engines lag behind other SUVs in its class in terms of efficiency, though that trade-off is to be expected given the Durango's superior power and towing capacity.

The 2017 Dodge Durango is a solid choice among midsize SUVs, offering a unique blend of daily driver comfort and high-powered utility. Whether you need to tow thousands of pounds or you're embarking on a lengthy family road trip, the Durango is unlikely to disappoint. If you don't like the added power and functionality, however, there are other options worth your consideration. Before you make a decision, take another look at the pros and cons the 2017 Durango brings to the table. 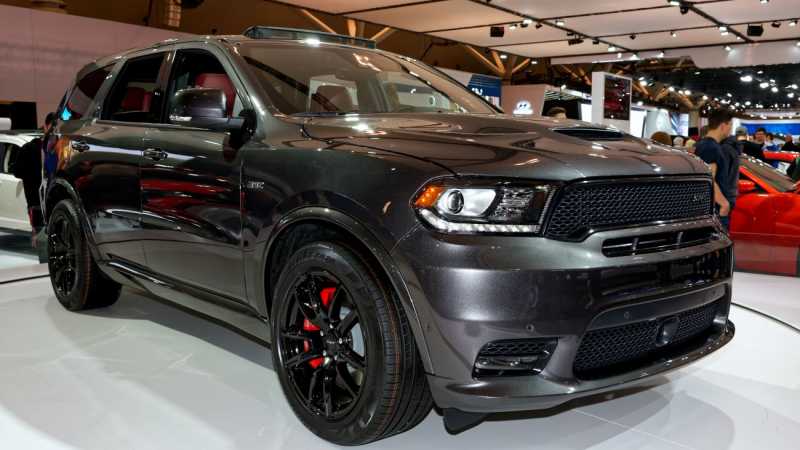