Inside the 2017 Dodge Journey

The 2017 Dodge Journey is a midsize SUV designed to deliver a value-based blend of cargo space, passenger capacity, and versatility. Potential buyers usually consider the price of the 2017 Dodge Journey as one of its key selling points, but the features included in many of the trim levels are more indicative of a costlier sport utility vehicle.

Priding itself on the ability to appeal to outdoor enthusiasts, the 2017 Dodge Journey can be customized with a number of factory accessories and packages that cater to participants in sports such as bicycling and kayaking. Because of its efforts in these areas, Dodge was awarded an Active Lifestyle Vehicle Award and was named the "Best Value On-Road" at the Carspondent Awards Competition.

Each of the trim levels of the 2017 Dodge Journey can include the base engine or a more powerful engine with the exception of the GT model, which does not offer the base engine. The base engine is a 2.4-liter Inline four-cylinder engine that delivers a somewhat meager 173 horsepower. The more powerful engine, however, is a 3.6-liter V6 that offers a much more impressive 283 horsepower. A front strut suspension and a rear multi-link suspension help with handling and maneuvering, and four-wheel disc brakes with an anti-lock braking system provide suitable stopping power.

While previous models have struggled with crash tests and safety ratings, the 2017 Dodge Journey has improved significantly in almost every category. The Insurance Institute for Highway Safety rates the 2017 Dodge Journey as "Good" in every crash test with the exception of the Small Overlap Front Test. Although it is rated "Poor" in this category, most midsize SUVs have the same rating due to the size and design of sport utility vehicles. The National Highway Traffic Safety Administration gives the 2017 Dodge Journey four out of five stars for frontal crashes and rollovers, and five out of five stars for side impact crashes.

The 2017 Dodge Journey also has a number of safety features designed to help protect the occupants of vehicle, such as side airbags for front and rear passengers, a rollover protection system, and an on/off switch for the passenger-side airbag. Adjustable foot pedals, a brake assist system, and the optional blind spot monitors help make it easier to drive in a safe manner. The auto-leveling headlights are a unique feature that ensure that oncoming drivers are not blinded and visibility is not decreased when the road contains bumps, uneven surfaces, or turns.

The standard infotainment system in the 2017 Dodge Journey is perhaps one of its most popular attributes, and it can be upgraded even further with the optional eight-inch touchscreen, voice-activated Bluetooth, and navigation package. The patented Uconnect system that is featured in many of Dodge's vehicles is only available in the more expensive models. The easy to read menus and design is consistently mentioned in reviews and testimonials.

The midsize SUV category is characterized by fierce competition among more than two dozen different vehicles, and it can be difficult to compare specific models when the pricing can vary by as much as $25,000.

The 2017 Dodge Journey is most similar to the Hyundai Santa Fe and the Subaru Forester. It is important to note, however, that both of these models have a higher MSRP than that of the 2017 Dodge Journey. While the Santa Fe offers a little more cargo room and passenger space, the additional weight and larger size require a sacrifice in fuel economy. The Subaru Forester offers all-wheel drive and many of the same features, but it only offers 170 horsepower and the pricing is somewhat higher.

The 2017 Dodge Journey is often noted for its patented Uconnect and Infotainment system, a feature not usually found in similarly priced vehicles. No matter which trim level is selected, a number of options and add-ons are offered, which allow the buyer to customize their driving experience based upon personal tastes. The optional V6 engine delivers a reasonable amount of power while maintaining relatively efficient fuel performance, and the pricing of the 2017 Dodge Journey makes it less expensive than any of its competition.

The 2017 Dodge Journey does have some weaknesses, however, that must be considered prior to making a purchase. The cargo space is somewhat limited, particularly if the vehicle is equipped with the optional third row seat. The base engine is weak and provides limited acceleration.

Overall, the 2017 Dodge Journey delivers an incredible value for a fraction of the price of the majority of its competition. While there are some cons such as the underpowered base engine, this can easily be remedied by opting for the V6 engine without sacrificing fuel efficiency. The wide variety of trim levels and available packages make the vehicle versatile. This is why the 2017 Dodge Journey appeals to a large target demographic comprised of both older and younger drivers. With the aggressive pricing and rebates sponsored by the factory, a car buyer is sure to get a great deal. 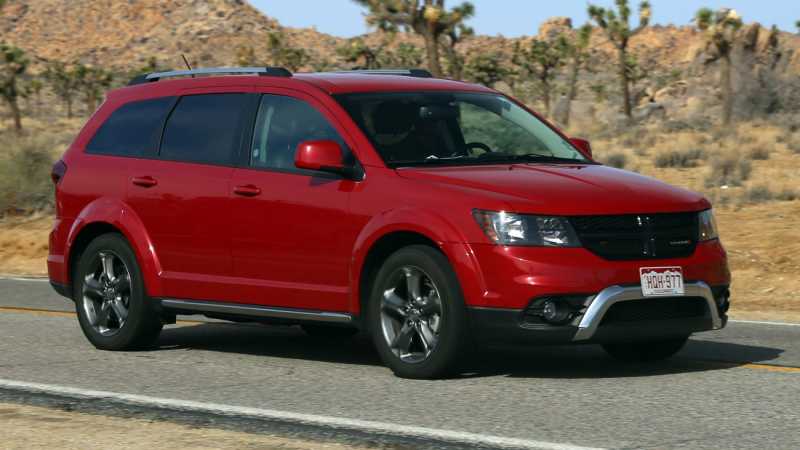