Inside the 2017 Ford Fusion

American drivers can be hard people to please when it comes to the cars they drive, with never-ending demands. That is why automakers are constantly revising, updating, and redesigning their products to satisfy their grand expectations.

Take the 2017 Ford Fusion, for example. It adds two new trims to its lineup, revamps the front exterior with a new headlight design and optional LEDs, and includes a stronger engine for its V6-powered mode. It receives a plethora of upgrades, including the new Sync 3 infotainment system. The interior also gets a revised center console layout and an easy-to-use rotary transmission gear selector.

The latest Ford Fusion is now offered in five trims: S, SE, Titanium, Platinum, and V6 Sport. A Hybrid S and Hybrid Energi Platinum are also available. The base Fusion S model will set you back about $23,000, the SE offers more bang for your buck at $25,000, and the Titanium model is offered at $31,000. The manufacturer's suggested retail price for the V6 Fusion Sport and the Fusion Platinum models are $34,300 and $37,500 respectively. The two Hybrid models range from about $26,000 for the Hybrid S to almost $42,000 for the Hybrid Energi Platinum.

The 2017 Ford Fusion gets a broad range of engine options - from a four-cylinder engine to a new-for-2017 V6 engine.

The Fusion S and Fusion SE are driven by a 2.5-liter four-cylinder engine that kicks back 175 horsepower and 175 lb-ft of torque. EPA estimates rate this engine at 25 mpg combined (21 city/32 highway).

The second engine (the 2.0-liter) is standard on the Titanium and Platinum models and allows for AWD configurations. A FWD 2.0-liter engine gets 25 mpg combined (21 city/31 highway), and an AWD version earns 23 mpg combined (20 city/29 highway).

A Fusion Titanium fitted with the 2.0-liter engine and equipped with AWD made it from naught to 60 mph in 6.9 seconds.

The Fusion Sport comes equipped with a twin-turbo 2.7-liter EcoBoost V-6 engine that cranks out 325 hp and 380 lb-ft of torque - this is the most robust engine in the midsize sedan segment. It is sold standard with a six-speed transmission and an all-wheel drivetrain. Fuel efficiency approximations rank it at 20 mpg combined (17 city/26 highway).

The 2017 Ford Fusion benefits from an extensive list of standard safety features. Top among them being traction and stability control, daylight running lights, antilock disc brakes, and an all-around airbag system. The standard Ford Sync system has an emergency crash notification feature that, when paired to a compatible cell phone, automatically dials 911 after a crash. The Ford's MyKey sets specific parameters for secondary drivers, like your teen.

A 2017 Ford Fusion Titanium came to a complete stop from 60 mph in 123 ft during Edmunds' brake testing.

The new Ford Fusion is a recipient of the IIHS Top Safety Pick+ designation and the NHTSA's five-star overall safety rating. The IIHS also gave it a highest possible "Good" in its side-impact, moderate-overlap frontal-offset, and small-overlap frontal offset tests. The government presented the Fusion with five out of five stars in the overall crash protection category. Four stars for side-impact protection and five stars for total frontal protection were also awarded. It also earned a "Good" rating for whiplash protection.

The Fusion Titanium gets an HD radio, a premium 12-speaker Sony sound system, and all other features in the SE's optional Technology package.

The Fusion Sport is equipped standard with a 9-speaker audio system but is an option with the Titanium's technology features.

The 2017 Ford Fusion is wonderfully well-rounded and is a top pick for drivers looking for a cool family hauler. It did well last year having sold more than 300,000 thousand 2016 units, a figure that most vehicles in its class did not achieve.

The latest Fusion is also one of only three midsize sedans that provide AWD. The other two being the Chrysler 200 and the Subaru Legacy. The addition of the new Sport trim sets it way above other family sedans, such as the Honda Accord and the Toyota Camry. Some experts even dare to place it alongside the performance BMW M5, which would make it better than the likes of the new BMW 340i and the Audi S4. 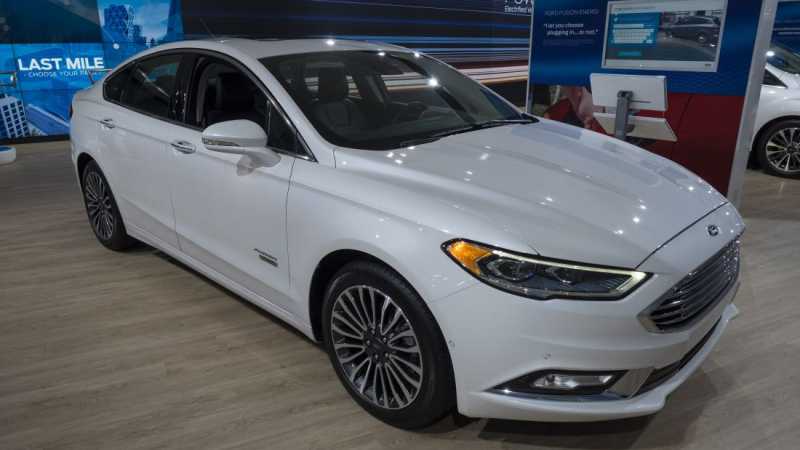