Inside the 2017 Nissan Sentra

Born in the 1980s as a subcompact car, the Nissan Sentra has transformed into a reliable compact car. For 2017, the Sentra offers a lineup of eight affordable models including the cool SR Midnight Edition and NISMO. Despite having an economical design, the Sentra is available with premium technology, such as the NissanConnect infotainment system and Bose audio system.

Under the hood, this Nissan has some class-leading installations like the Xtronic CVT and a turbocharged engine. The signature Intelligent Safety Shield package also makes the Sentra a class leader in active safety. In fact, this model has performed very well in the crash tests that were done by the National Highway Traffic Safety Administration.

The Nissan Sentra S is the base trim that has a starting Manufacturer's Suggested Retail Price (MSRP) of just under $17,000. The SV and SR are upgraded models that cost less than $20,000. Available with an array of custom styling options like a black rear spoiler, the sleek SR Midnight Edition starts at just over $20,000.

Running on a compact turbocharged engine, the SR Turbo and SR Turbo Midnight Edition are priced near the $21,000 mark. If you're looking for ultimate performance and flashy styling, then select the NISMO trim. You'll have to dish out about $25,000 for this awesome Sentra model that includes the NISMO-tuned suspension and steering system as well as an aerodynamic body kit.

The Nissan Sentra's 1.8 L MRA8DE engine is available in two versions. The first option pumps out 130 horsepower and 128 pound-feet of torque. The second choice offers 124 hp and 125 lb-ft of torque. Both of these compact engine blocks come with Double Overhead Camshafts in the valvetrain.

For a compact car, the Sentra has a very stable chassis that's supported by a rear torsion beam and independent front struts. Compatible only with the Xtronic CVT, the Active Understeer Control delivers extra stability especially on curved or slippery roads. Even the electric power steering system automatically adapts to the vehicle's speed in real time. The Brake Assist and Anti-Lock Braking System (ABS) help you bring this lightweight Nissan to a smooth stop.

When the 13.2-gallon fuel tank is filled with regular unleaded gasoline, you'll get a nonstop driving range of just under 500 miles on the open highway. Although the Sentra doesn't come with the Auto Start-Stop technology that's common in some economical sedans, this model delivers good overall efficiency for daily driving.

A 5.8-inch color touch screen is available in the Nissan Sentra. A gentle tap of the display lets you access the signature NissanConnect portal that's loaded with applications. In addition to using the built-in GPS navigation system, you can get directions from Google Search. SiriusXM Traffic and Travel Link feeds recommend the most efficient route to your final destinations. With NissanConnect, you can even access popular social media channels like Facebook and Twitter. If you have an iPhone, you can sync it with the car's infotainment system via Siri Eyes Free.

When it comes to entertainment, the NissanConnect suite is connected to many premium services like SiriusXM Satellite Radio, iHeartRadio and Pandora Internet Radio. The standard Radio Data System (RDS) ensures optimum reception of music channels on any road. You can sing along to your favorite hits by turning on the Bose audio system, which comes with eight speakers including two subwoofers.

To prevent distractions while driving, you should look at the 5-inch Advanced Drive-Assist Display. Embedded into the instrument cluster, this digital display receives feeds from the navigation system, sound system, Bluetooth and more. You can toggle through the display by using controls on the steering wheel.

For 2017, the Nissan Sentra has earned the "5-Star Safety Rating" from the National Highway Traffic Safety Administration. This rating was given based on the car's excellent performance in the traditional side barrier crash test. The car's doors are reinforced with pipe-style steel beams that are engineered to withstand impacts of severe magnitude. During a front crash, the hood will uniformly buckle. Additionally, the car's steering column assembly is designed to absorb energy from harsh collisions.

Of course, the Sentra has plenty of standard passive safety features that mitigate injuries during accidents. Installed in the front cabin, the Nissan Advanced Air Bag System (AABS) deploys in two stages. Linked to a rollover sensor, curtain air bags cushion all of the car's five occupants during side collisions.

For its economical design, this compact Nissan also offers advanced technology that lowers the risk of accidents. The following features are part of the patented Intelligent Safety Shield package.

The Intelligent Cruise Control is another accident-avoidance system that's available in the Sentra. This cruise control function can turn off and resume in response to the speed of other cars ahead on the highway.

How it Stacks up against the Competition

As a compact car that's designed by a Japanese company, the Toyota Corolla can be fairly compared with the Nissan Sentra. Running on a 1.8 L I-4 engine, the Corolla doesn't quite match the capabilities of the Sentra models that are equipped with the turbo engine. However, the Corolla boasts plenty of high-tech amenities like the Entune multimedia system with GPS navigation. The Corolla's Toyota Safety Sense P package is also very similar to the Intelligent Safety Shield.

When looking for American cars to compare with the Sentra, the Chevrolet Cruze is an appropriate selection. The Cruze is driven by a turbo engine that's just as powerful as the turbo engine in the Sentra. Available with 4G LTE Wi-Fi, the Cruze actually offers better connectivity options than the Sentra. 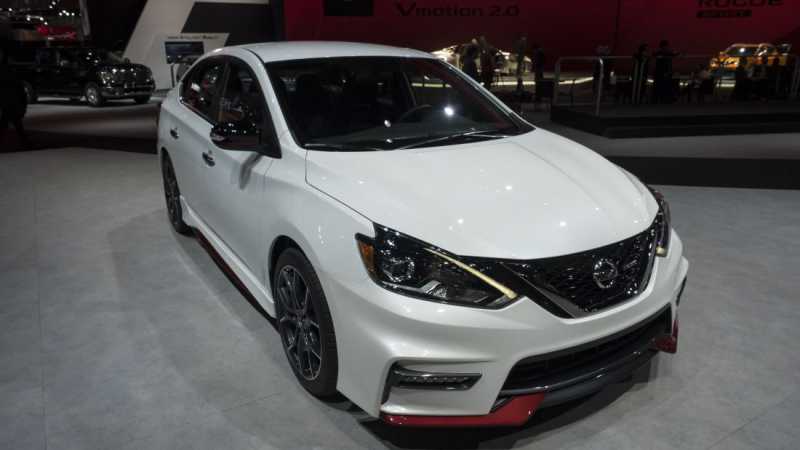