The 2017 Dodge Challenger is here, and it comes in three distinct configurations: the T/A, the T/A Plus, and the T/A 392. The T/A in the name is in reference to the original model that Dodge used when they competed in the SCAA's Trans-Am racing series that started in 1970.

You'll also be intrigued by the retro paint colors Dodge brought back for this model, including Green Go and Yellow Jacket High-impact Paint. Optional retro-style pins that are designed to keep the hood secure are also available for factory installation.

The overall design of the 2017 Dodge Challenger has a very old-school feel, but the car's new design features add a modern touch that manages to blend together the best of both. All three models feature a new hood design that includes a large center-mounted scoop. Speaking of the car's hood, while the vehicle comes in your choice of color, the hood, roof, trunk lid and rear wing are finished in satin black. The car's fuel-filler door and side stripes also sport the same satin black finish.

Size of the 2017 Dodge Challenger

MSRP for the Dodge Challenger

Each version of the T/A comes with a standard performance exhaust system. The car also has a standard six-speed manual transmission, but you do have the option of choosing an eight-speed automatic transmission.

Both of these are available with the same 8-speed auto found in the 3.6, as well as a 6-speed manual version. The 8-speed TorqueFlite automatic system includes Sport mode with paddle shifters, as well as Fuel Saver Technology with four-cylinder mode and an interactive Decel Fuel Shut Off.

Specs for the Dodge T/A

The Dodge T/A has an all-new 2.75-inch active performance exhaust system that is controlled electronically, as well as 20 x 9-inch lightweight forged-aluminum Mopar wheels that are 1-inch wider than the norm and finished in Hyper Black II. The T/A also comes with a Super Track Pak that includes:

Unlike the other versions, the T/A includes a ram-air design that was inspired by the 2016 Hellcat. The ram-air design in the T/A allows air to pass through both of the car's inboard headlamps to the engine intake, which includes a conical Mopar air filter. This is strikingly different from the single headlamp engine intake design of the Hellcat.

Specs for the Dodge T/A Plus

In addition to the T/A's standard equipment, the T/A Plus features ventilated, heated Nappa leather performance seats in black that include an embroidered “T/A” logo. A brand new fourth-generation Uconnect 8.4 system that includes Apple CarPlay and Android Auto smartphone integrations is also included in this model.

The T/A Plus also expands on the capabilities of the Super Track Pak by adding a shortcut button to the Dodge Performance Pages that are embedded in the class-exclusive Uconnect radio. This feature provides you with visible performance information, including:

This is all displayed on a 7-inch thin-film transistor with a customizable cluster display. Another interesting feature is the new steering wheel. The Dodge Performance steering wheel is wrapped in genuine leather, and it has an all-new power tilt-and-telescoping column to help you customize your driving experience.

Specs for the Challenger T/A 392

The T/A 392 features best-in-class horsepower at 485 and it has 475 lb.-ft. of torque. This allows it to deliver up to 113 more hp and gives it a 65-lb.-ft. boost in torque when comparing it to the Challenger T/A models. This model also has a 180-mph primary speedometer, electronically controlled active performance exhaust system and 220-amp alternator.

Features of the 2017 Dodge Challenger

Dodge has improved on the finishing material quality of the 2017 Challenger, which also comes in your choice of fourteen different colors. Another exciting improvement is the design of the instrument panel. It now has a sleeker, more convenient design that features straight, clean lines and a more concise look.

In addition to adding a duel intake, all the T/A models are equipped with a standard performance exhaust system. These two features do nothing to boost the engine output. The T/A and T/A Plus models produce the same 375 horsepower as the R/T models, while the T/A 392 produces the same 485 horsepower as other Challenger 392s.

Fuel Efficiency of the 2017 Dodge Challenger

This car has plenty of horsepower at 305 to 707 hp. Even with all that muscle you'll be happy to know that it still gets 19 mpg in the city and 30 mpg on the highway.

Pros and Cons of the 2017 Dodge Challenger

Overall, the 2017 Dodge Challenger has a number of new features that give it a great deal of aesthetic appeal. There are a few new features under the hood as well that provide intriguing new elements to the vehicle, but don't really amount to much in the end. 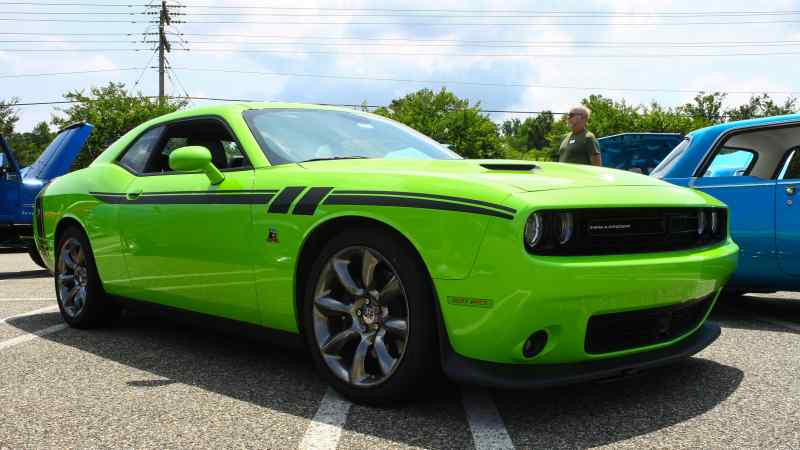 See What They’ve Done to the New Dodge RAM