Among SUV crossovers, the sleek contours of the four-door Volvo XC90 attract favorable attention. It displays a long, sculpted, aerodynamic profile. The stylish exterior appears more compact than a conventional sport utility vehicle, without sacrificing the versatility of a sport utility vehicle. It extends just over 16 feet in length and slightly under 6 feet in height.

These vehicles supply standard keyless entry and remote start capabilities, so drivers can heat or cool the cabin before driving. This versatile sport utility vehicle navigates along busy city streets or remote rural roadways with equal ease. Carrying a starting manufacturer's recommended retail price of $45,750 for gasoline-powered models, the XC90 will likely find a welcome place in many corporate fleets.

The gasoline engine-powered versions of XC90 in the T5 and T6 models rely on a 2.0 L turbocharged 4-cylinder engine. The Volvo XC90 can achieve a robust 250 horsepower – or more – depending on the engine options and trims selected by the customer.

Volvo has achieved an international reputation for developing innovative brands with many important safety features. This vehicle includes a hybrid electric and gasoline-powered model. The manufacturer uses Drive-E powertrains in the hybrid 2017 XC90 T8 models to obtain efficient performance. This sophisticated technology helps coordinate the operation of the hybrid 4-cylinder turbocharged gas and supercharged electric engine. On its website, Volvo indicates the new technology offers a seamless transition when drivers switch between the gas and electric engines.

Volvo also excels in building vehicles with high safety ratings, and the XC90 does not disappoint in that respect. The Insurance Institute for Highway Safety reportedly choose this crossover SUV as a 2017 Top Safety Pick. The vehicle's solid steel frame and its built-in safety features contributed to its impressive performance during crash testing.

Drivers and passengers will also appreciate a variety of options for high tech infotainment and communications systems in the XC90. A central LED touchscreen Sensus visual display panel provides the driver with ready access to computerized features. Passengers may access Wi-Fi in the XC90, enabling them to use mobile technology for communications and entertainment. Available Apple CarPlay contributes to the ability to use a variety of apps on the road.

As a luxury vehicle, the 2017 Volvo XC90 competes with several other roomy executive vehicles in the crossover sport utility vehicle class, including the following:

Of these fashionable crossover SUVs, the Audi Q7 offers the highest starting price. It begins with an MSRP in the $55,000 range. Like the Volvo XC90, it supplies a trendy aerodynamic exterior. Its performance features will likely appeal to many drivers who may also consider selecting the Volvo XC90.

The 2017 Acura also includes an available hybrid model, the 2017 Acura MDX Sport Hybrid. The MDX gasoline-powered model starts at an MSRP in the $45,000 range and, like the Volvo XC90, it offers available features and upgrades which quickly raise the price for customers choosing those options.

The 2017 Mercedes-Benz GLC vehicles begin with an MSRP in the $40,000 range; adding optional features and upgrades will raise that figure quickly. While the stylish crossover SUVs from Mercedes-Benz offer both a four-wheel and two-wheel drive option – like the Volvo XC90 – they don't include a hybrid engine design at this time.

Volvo recently announced its intention during the next decade to move away from automotive designs which rely on gas-powered vehicles in favor of greener, more environmentally friendly electric engines. While the XC90 still offers the option of using gasoline, customers may request the XC90 T8 Plug-in Hybrid model. It can operate very efficiently on electric power, and uses gasoline as an alternative fuel option. The use of electricity enables drivers to avoid or reduce expenses associated with auto gas bills and required emissions-testing modifications.

Versions of the XC90 which run on gasoline also display fuel economy: this brand reportedly attains fuel consumption rated as "best in class" among comparably sized crossover SUVs, with 22 miles per gallon under city driving conditions and 26 miles per gallon on the highway. The hybrid version of the Volvo XC90 offers an especially cost-effective option in terms of fuel efficiency. Drivers can recharge the battery at home to provide power between short commutes. For longer journeys, they will soon use recharging stations currently under construction in many places.

The manufacturer's commitment to building vehicles with impressive safety features certainly contributes to this brand's allure. Additionally, the availability of a hybrid engine model, and Volvo's willingness to support electric motors, may ultimately help make the Volvo XC90 an economical choice for some households.

Some disadvantages of the 2017 XC90 models relate to price considerations. For instance, the availability of very similar, less expensive vehicles suggests the gasoline powered versions of the XC90 could face strong competition. If drivers choose to forego available features and upgrades, for instance, the Mercedes-Benz GLC represents a more cost-effective alternative in terms of its initial acquisition price Ultimately, the weight a customer places upon design features and brand distinctions may determine the popularity of models in the luxury gasoline-powered crossover sport utility class. 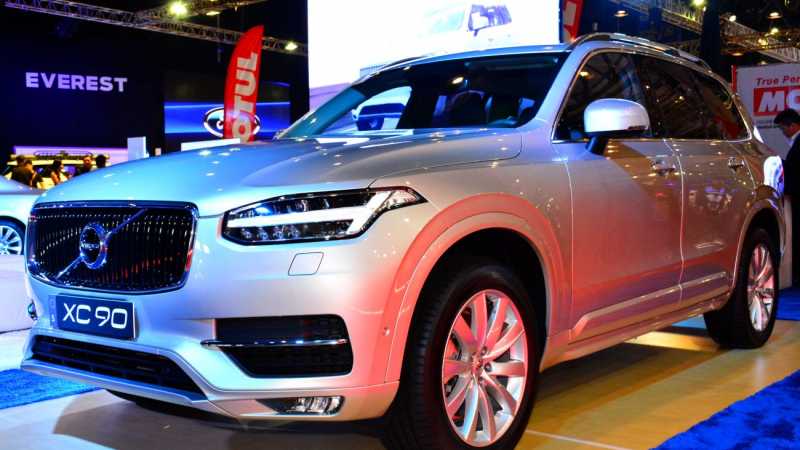