Inside the Infiniti Sedan Lineup

Luxury sedans are a classic choice for drivers who want sophistication and a smooth, comfortable ride. When it comes to Infiniti's lineup, there's a car in this class for every driver. The Q50 is an affordable yet elegant compact car that's suitable for families. The Q70 adds performance to the iconic midsize luxury sedan, while the Q70L offers a sleeker profile with expanded interior space. At the top of the heap, the Q60 Coupe is the sportier sibling of the legendary luxury sedan. And within Infiniti's 2017 luxury car lineup, you're sure to find a model that's perfect for you.

The entry-level Infiniti luxury car is the Q50, which is technically categorized as a small car. This compact sedan boasts excellent safety scores, a choice of powerful engines, and high predicted reliability from J.D. Power and Associates. With an extensive range of trims to choose from for 2017, including a new Sport trim on the 3.0 model, it's easy to customize the Q50 to your liking.

The base model of the 2017 Q50 is a turbo four-cylinder producing 208 horsepower. Those who want a performance car, however, have several more powerful options to choose from: two twin-turbocharged V6 models, one providing 300 horsepower and the other pushing the envelope to 400. What the Q50 offers in power, though, it lacks in fuel efficiency, with an EPA-estimated rating of 23/31 city/highway on the base model. Wallet-conscious drivers may want to opt for the hybrid version equipped with a 350-hp electric motor.

Although well-appointed, some may find the cabin design of the Q50 a bit dated, and the seats aren't as supportive and comfortable as those in comparable models. However, the spacious interior offers plenty of room for passengers in the rear, as well as 13.5 cubic feet of cargo space. For technology, you'll find dual touchscreens with intuitive operating systems, though they are lacking the latest connectivity features like Apple Play. Other standard features include push-button start, dual-zone automatic climate control, Bluetooth, HD and satellite radio, two USB ports, and a rearview camera.

Safety is where the 2017 Infiniti QX50 really shines; it has a five-star overall safety rating from the National Highway and Traffic Safety Administration (NHTSA) and has the highest rating from the Insurance Institute on Highway Safety (IIHS) in four out of five crash test categories.

The Q70 is Infiniti's entry-level midsize luxury sedan, offering an expansive interior, lots of powerful engines to choose from, and plenty of features. However, like the Q50, it hasn't been recently updated and lags behind the technology and modern styling offered by class competitors.

The cabin offers the luxury you would expect from this class, however, with plush, comfortable seats and an array of standard features, including heated front seats, Bluetooth and USB connectivity, a moonroof, satellite radio, a 7-inch display, navigation, a 10-speaker Bose audio system, and voice recognition. Standard safety equipment includes a rearview camera along with a 360-degree monitor with moving object detection and front and rear sonar detectors. With 14.9 cubic feet of cargo space, the 2017 Q70 is suitable for a weekend getaway.

Drivers of the 2017 Infiniti Q70 can choose between three powerful engines, a 330 horsepower V6, a 420 horsepower V8, or a V6 hybrid with a combined 360 horsepower. The base engine gets 18/24 city/highway and 16/24 for the V8, though if you opt for the hybrid you'll get as high as 28/33, which is much better for this class. While the Q70 is lacking in standard active safety features, it is designated as a Top Safety Pick of the IIHS for its exceptional crash test scores.

If you're intrigued by the idea of a spacious passenger area, consider the Q70L. This stretched version of the standard Q70 has an extra-long wheelbase, providing rear-seat guests with almost six inches of extra leg room. Exterior updates to the Q70L version compared to the Q70 include redesigned daytime running lights, five additional LED lights, chrome trim, and a split rear bumper. Inside, you'll find leather interior upholstery, silver powder wood veneers, redesigned noise isolation and shock absorption for a smooth, quiet experience, independent rear entertainment system, and reclining rear seats. Unlike the base model of the Q70, the Q70L includes new active safety features like forward collision warning, backup collision intervention, and a 360-degree around view monitor.

Fully redesigned for 2017, the Q60 is Infiniti's answer to those who want a performance sports coupe with luxurious amenities. This is the Infiniti luxury car of choice for those drivers who prize modern styling and the latest in technological advances. However, some will be turned off by the poor fuel economy and cumbersome handling. Drivers can choose from five different Q60 trims, attractive for those who prefer to customize their rides.

Although it's a two-door four-seater, you'll find that the 2017 Q60 has a decent amount of both passenger and cargo space, especially compared with other small cars. However, some taller passengers might be cramped in the rear. The front seats are firm and supportive, which combined with the generous trunk makes these a decent choice for couples who enjoy weekend jaunts.

The styling is contemporary and cutting-edge, including unique add-ons like optic fiber trim. However, some may find the dual-screen infotainment system challenging to use, while others will question the outdated use of analog knob controls even with the included touchscreen. In addition, the car does not include either Android Auto or Apple CarPlay functionality, both standard on most new cars regardless of class. Standard comfort and convenience features are generous: eight-way power-adjustable front seats, dual-zone automatic climate control, push-button start, a six-speaker audio system with both HD Radio, satellite radio, two USB ports and Bluetooth connectivity, and a dual-screen infotainment system.

The base model is equipped with 208 horsepower, turbocharged 2.0-liter four-cylinder engine, but those who are choosing the 2017 Q60 for its sporty prowess will likely want to upgrade to a more powerful option. These drivers can choose between two different twin-turbocharged engines, one providing 300-hp and one that gives you 400-hp. While handling and suspension are sport-tuned, some reviewers find the Q60 less agile than you'd expect for a sports model. You'll have better luck if you upgrade to the optional adaptive suspension system, which lets you choose between three different drive modes, Standard, Sport, and Sport Plus. When it comes to fuel economy, the base engine provides 22/30 city-highway miles per gallon, which is low for this class.

While a rearview camera is the only standard active safety feature for the 2017 Infiniti Q60, you can opt to add forward collision warning, blind spot monitoring, and lane keep assist as well as front and rear parking sensors and a 360-degree camera. 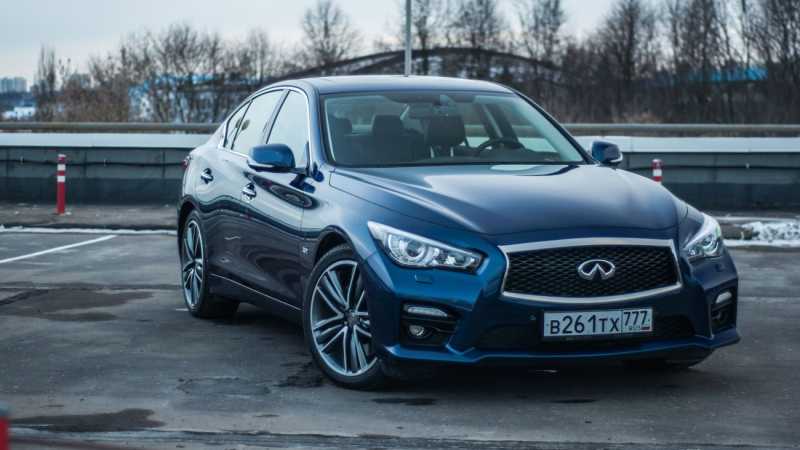