Inside the New 2017 Ford Ranger

The Ford Ranger is back for 2017 with a renewed focus on family comfort and utility, while still retaining its rugged underpinnings as a workhorse pickup. As we've seen in recent years, Ford has smartly shifted its focus from purely utilitarian work-related utes to a more well-rounded vehicle that can be used as both a comfortable people carrier and a tough vehicle for everyday use. The Ford Ranger is a prime example of this shift, featuring large crew-cab options and a long list of comfortable extras.

True to the Ford design philosophy, the Ranger is a pickup that punches well above its weight. In terms of sheer capability, the Ranger is comparable to offerings from Ford's regional competitors, and it includes a multitude of options to fit your needs. The number of configuration options for the 2017 Ranger is almost dizzying, with a chassis that will work for nearly any situation or consumer need.

To mesh with Ford's new focus on multi-role pickups, the Ranger model line has an equal number of trims for the vehicle's crew cab. Whether you're seeking a comfortable family carrier that can haul cargo, or a dedicated trucking platform to use as a workhorse, there is likely a Ranger chassis that will suit your needs.

We're going to be focusing on the XLT trim in this article, as it's very likely that will be the most popular model for 2017. The suggested list price is $57,615 for the trim we are assessing here, which is a 4WD automatic (Tech Package not included).

The XLT features a 3.2L five-cylinder turbo-diesel engine that can be mated to a manual or an automatic gearbox. This puts the XLT at slightly less pulling power than the Chevrolet Colorado or the Volkswagen Amarok V6. It's still no slouch in the hauling department and measures up well against other vehicles in its class.

The 6-speed automatic gearbox performs exceptionally well in all driving conditions with smooth and intuitive shifts. There's an option for manual override and it responds well to driver input, making intelligent power transitions when instructed to do so.

In terms of towing capacity, the Ranger stacks up well to other pickups in the class, rated at the same 3500kg as the HiLux, BT-50, Colorado, and the Isuzu D-Max. It has a decently sized flatbed when equipped with the crew-cab, but if you're looking to maximize load space there are other options that offer more room for cargo.

The suspension provides a smooth drive both on and off-road, with a 4WD drive-train option and excellent ground clearance. Even more impressive is the vehicles off-road capability, with a true low-range gearbox and locking rear-differential. The Ranger can handle just about any terrain condition.

The Ranger XLT comes loaded with a respectable number of standard safety and entertainment features, but for its price Ford could have thrown in the extra $800 Tech Package as standard. The optional Tech Package includes lane-departure warning, a lane-keeping aid, adaptive cruise control, automatic high beam, and a driver impairment monitor to warn you when you're too tired to drive. For those who are already comfortable with the XLT's price, selecting this package will be a no-brainer and is a must have.

One of the highlights for this year's model is the introduction of the Sync 3 infotainment package, Ford's easy-to-use entertainment software. Paired with the center-mounted 8-inch touchscreen panel, this software provides a rear-mounted camera for reversing, high-quality satellite navigation, and, of course, Apple Carplay and Android Auto. A smattering of convenience and utility features include dual-zone climate control, front and rear parking sensors, a digital instrument panel, and a handy 12V socket in the truck bed.

In an objective comparison to the other leading utes, the Ford Ranger meets or exceeds its rivals in almost every way. With similar towing capacity and available power, the Ford Ranger will find itself meeting or beating most of the vehicles in its class, though it's worth pointing out that the mighty Amarok V6 has it thoroughly whipped in the speed department. Regardless, the Ranger has it where it counts, providing enough low-end power to be used as a workhorse, and enough high-end output to satisfy the vast majority of daily highway drivers.

When it comes to interior quality, the Ranger does fall short of its higher-end rival, which isn't surprising. The Volkswagen Amarok V6 certainly has the edge in design quality, with much more sturdy (read: not plastic) paneling and overall nicer seats. That doesn't make the Ranger a slouch, however, and both vehicles are comparable when it comes to comfort and utility.

The interior dash layout is shockingly similar, and the Ranger boasts digital instrument panels while the Amarok does not. There's also more legroom in the backseat of the Ranger, which can comfortably accommodate two tall adults. The Amarok has a wider bench, but is more cramped due to the shorter cabin size. Both claim a wealth of handy extras like storage pockets, plugins for phone chargers, and more.

The Ranger XLT sits at the higher end of the price range, but still clocks in below the Amarok's $60,000+ figure.

Ford claims the fuel efficiency of the Ranger XLT to be at 9.0L/100km, with real-world tests clocking it 5-10% higher than the advertised amount. That's still very good for its class. It has an 80L tank and now meets the Euro 5 emissions requirements.

The XLT has it where it counts for a pickup ute, and it's very likely this year's model will find itself making “best-of” lists for reviewers and consumers alike. It really is a joy to drive, handling more like a compact SUV than a light pickup, and with plenty of power for a daily driver. When things get dirty, the XLT handles itself exceptionally well in both hauling and off-road conditions, making is a fantastic multi-role vehicle for work and play.

Families will love the wide interior space and long list of useful convenience features. It's comfortable enough to take on long drives and safe enough to have peace of mind that it's doing its best to keep you out of an accident. If you've got children, you can comfortably seat three small-ones in the backseat, with charging stations for their gizmos to keep them entertained.

It's not entirely without its downsides. The Ranger XLT is not exactly cheap, with the more luxurious Amarok costing just a few thousand dollars more, though you'd be hard-pressed to convince yourself that was the better choice. Some consumers will be turned off by the plastic-like interior, preferring something that offers a less “cheap” feel at this price range. As far as faults go, Ford could do much worse. The Ford Ranger is positioned to be a top-seller for pickup style utes this year. 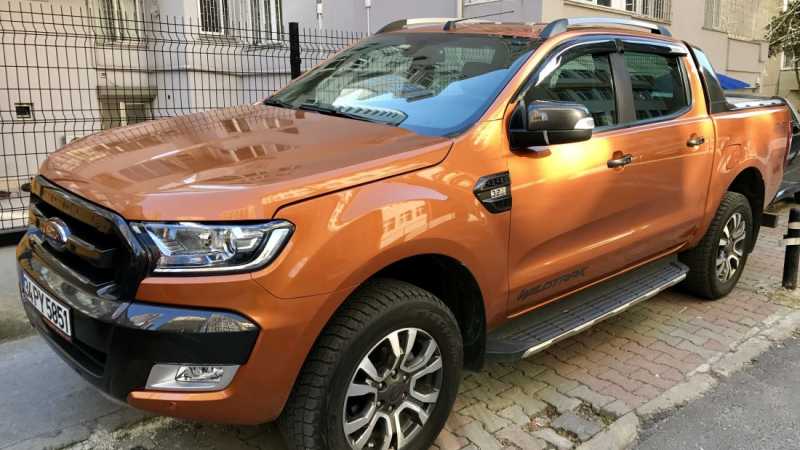