Inside the New Chevrolet Cruze

Introduced in 2009, the Chevrolet Cruze has gained popularity in the American auto market by offering a sporty ride in an affordable, compact car. The Cruze is particularly well-liked for its comfortable interior, smart technological features, and handling that belies its compact size.

The 2016 Chevrolet Cruze was completely redesigned from earlier generations of the car. The new model makes particularly strong advances by offering additional room for driver and passenger alike. In addition, the all-new Chevy Cruze has larger exterior dimensions. By offering a totally new vehicle, Chevrolet ensured that the 2016 Cruze includes many of the important technological features that car buyers have come to expect from General Motors' marques.

The 2016 Chevy Cruze offers considerable size. It has an overall width of 70.5 inches and a height of 57.4 inches, as well as a 106.3 inch wheelbase. This makes the Cruze one of the largest cars in the compact class and allows for the car to have a generously sized cabin. As just one example of that roomy interior, the front head room in the 2016 Chevrolet Cruze is 38.9 inches.

The manufacturer's suggested retail price (MSRP) for a standard 2016 Chevrolet Cruze sedan is $16,620. This makes the 2016 Cruze one of the most affordable cars in its class. Even if additional features are added to the vehicle, the Cruze still sells at a price point that makes it affordable for American families in need of a comfortable ride.

While the 2016 Chevrolet Cruze is a compact car, that doesn't mean it has the handling or acceleration of a small vehicle. To the contrary, some of the Cruze's performance specifications are strong:

However, some reviewers have noted that the Cruze does not offer engine options other than the Turbocharged gas engine. Another point of criticism has been the lack of cruise control as an option on some of the car's trims.

With a redesign before the 2016 Cruze was introduced, Chevrolet was able to incorporate unique features into this model that had not been a part of earlier versions of the vehicle.

Among its technology features, the new Cruze includes a Chevrolet MyLink radio with a 7-inch-diagonal screen, and Android Auto and Apple CarPlay compatibility, all of which drive a more entertaining. It also comes with OnStar 4G LTE with a Wi-Fi hotspot, although there are hefty fees attached to this service, and a rear-vision camera.

The Chevrolet Cruze also includes most of the safety features that consumers expect. In particular, the 2016 Cruze includes rear cross traffic alert, lane keep assist, and forward collision alert, all of which help prevent accidents. The redesigned body also includes a high-strength steel safety cage to provide protection in case of accidents.

In addition to an affordable MSRP, the Chevrolet Cruze is a leader in its market segment when it comes to fuel efficiency. According to Environment Protection Agency estimates, the new Chevy Cruze gets 29 miles per gallon in the city and 41 miles per gallon the highway. Chevrolet is quick to boast that these relatively high numbers compare favorably to the Cruze's rivals. In fact, the Cruze's city and the highway fuel efficiency are slightly higher than comparable models.

Compared to the Competition

The 2016 Chevrolet Cruze has several competitors in the crowded compact car class, with the two most potent rivals being the Honda Civic and the Toyota Corolla. Both are popular Asian imports, while Chevrolet likes to flaunt its American bona fides, especially with its slogan "Imported from Detroit."

Aside from carrying a different country of origin, the new Chevrolet Cruze stands apart from the Civic and Corolla as a slightly less expensive alternative. For instance, the Cruze's MSRP of $16,620 is less than the Civic's $18,490 and the Corolla's $17,300 retail prices. The Cruze also boasts slightly better fuel economy than both the Corolla and the Civic. At the same time, the Cruze is a bigger car than either of those rivals and offers both more horsepower and a roomier interior.

Strong fuel economy and a low price make the Chevrolet Cruze affordable, something that is probably the car's strongest selling point. Other pros include the Cruze's place as a big car in the compact space and the roomy interior.

On the flip side, the new Cruze does not offer much in the way of performance upgrades from the previous version. And the lack of engine choices (and cruise control on some models) are definitely cons for buyers. 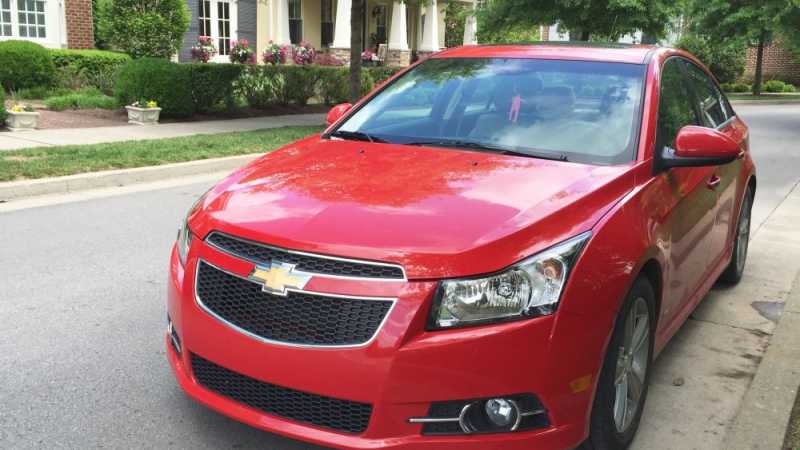