Inside the New Chevrolet Traverse

The full-size crossover SUV that is the Chevrolet Traverse has been a boon to the automobile market over the last few years. More passenger and cargo capacity than a standard four-door sedan and increased fuel efficiency over a standard Sport Utility Vehicle, the crossover is this generation's station wagon and more.

Many of the more successful crossovers have come from international markets. For example, the Hyundai Santa Fe and Nissan Pathfinder were available long before the first the first Traverse was released in 2009.

Nevertheless, this American model, a replacement for the Saturn Outlook, has maintained strong sales. Plus, it has ranked high in safety from the National Highway Traffic Safety Administration (NHTSA). So, what does the Chevrolet Traverse have to offer American drivers?

This full-size crossover is nearly 17 feet in length with a similar measurement between front and rear axles. Height is approximately six feet tall without any roof accessories. Storage-wise, the maximum amount available with the rear seats folded down is 116 cubic feet.

The Traverse offers both front wheel and all-wheel drive models. Under the hood a 3.6-Liter V6 engine provides up to 281 horsepower at its maximum. With the basic towing package installed, the Traverse can carry an additional 5200 pounds of material over what is available via the vehicle's interior storage limits.

Rear view cameras come standard in all models of the Chevrolet Traverse to provide maximum safety when backing out of any parking area. Additional standard safety features include stabilization control, front air bag suppression, traction control, and OnStar services to alert first responders and other emergency services to accidents or car trouble. Advanced safety features in more expensive models include a front center air bag, forward collision alert, and a warning system which notifies the driver when they drift into another lane.

Sirius XM comes standard in all models of the Traverse to provide a maximum amount of entertainment whether doing chores or taking a road trip. Other standards include a color touch screen display, USB ports to charge and listen to portable devices, Bluetooth technology, and built-in WiFi. On higher-end models, vehicles come equipped with Bose speakers and Chevrolet MyLink radio with built-in navigation tools.

All models of the Chevrolet Traverse provide a 22-gallon gas tank. In the city, the Traverse manages 15 miles per gallon. Out on the highway, this crossover SUV gets 22 mph. This allows for approximately 500 miles of road trip driving.

How It Stacks Up

Comparing it to competition like the Ford Explorer, the Traverse holds up well in enhanced seating capacity -- eight instead of seven -- and cargo space -- 116 cubic feet versus 82. It has also received a five-star rating from the NHTSA when it comes to safety features.

In safety, the Traverse has it on the pros. In addition to the five-star rating, the crossover SUV is one of the first to feature a front center airbag in its vehicles. The 280hp V6 engine has also been ranked as one of the pluses for the vehicle. On the con side, its 22 mpg are not the tops in crossover SUVs. Some have also mentioned the mediocre offerings of the MyLink information and entertainment system which doesn't stack up to those like the Honda Pilot or Hyundai Santa Fe. 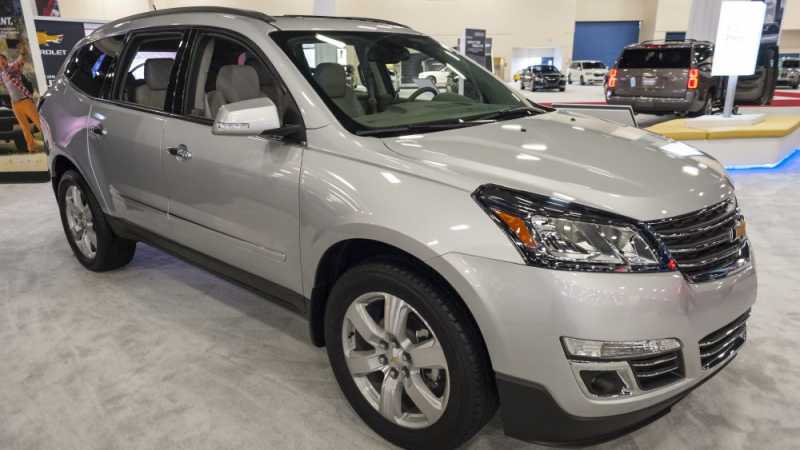