The Ford Edge has been a best-seller because of its do-it-all orientation.

Fresh from a complete redesign the model year before, the 2018 Ford Edge presents the SE, SEL, Titanium, and Sport as available trims.

Harnessed to the SE, SEL, and Titanium trims of the 2018 Ford Edge is a twin-scroll turbocharged 2.0-liter EcoBoost® inline 4-cylinder (I4) engine that produces 245 horsepower and 275 lb-ft of torque. The 2.0-liter I4 comes with auto start/stop technology, which reduces the amount of idling that the engine does, thereby cutting down on fuel consumption. The top-level Sport stands apart from the other trims with its twin-turbocharged 2.7-liter EcoBoost® V6, which produces 315 horsepower and 350 lb-ft of torque.

Each engine is linked to a 6-speed automatic, which features a SelectShift® gear shift and paddle shifters to manually upshift and downshift if you choose. Front-wheel drive is standard on the SE, SEL, and Titanium, with the option to upgrade to the Intelligent All-Wheel Drive (AWD) system. (The Sport is only available with AWD.) Fuel efficiency peaks at 21/30 mpg—provided your Ford Edge has the I4 engine with FWD.

Designed as a five-seater, the 2018 Ford Edge provides 113.9 cubic feet of passenger space. Cargo volume is measured at up to 73.4 cubic feet, thanks to the 60/40 split-folding nature of the rear bench seat. On the SE, Ford adds 10-way power adjustability on the driver’s seat, 6-way power adjustability on the front passenger seat, and an EasyFold® remote rear-seat release; and the automaker gives all seats upgraded cloth covering.

Going up to the Titanium or Sport adds leather-trimmed seating, front-seat heating capability, and a memory system for the driver’s seat. The Sport in particular has sports-style seats with perforated sueded inserts.

For playing music, the 2018 Ford Edge comes with a six-speaker stereo system that has a CD player. Also on board are an AM/FM radio tuner and Ford’s SYNC® communications system for voice-activating tasks like making a phone call and listening to music tracks. Ford adds SiriusXM satellite radio on the SEL. On the Titanium and Sport trims, Ford replaces the stereo system with a robust 12-speaker 390-watt Sony system with HD Radio. Another of the trims’ unique features in terms of infotainment is SYNC® 3, which is new for this model year and functions as an updated version of SYNC®. It provides additional features like hands-free text messaging.

For comfort and convenience, the 2018 Ford Edge starts off with cruise control, steering wheel-mounted controls, push-button engine start, and a single-zone automatic climate control system that comes with an air filter. On the SEL trim and higher, the HVAC system is upgraded to dual-zone control, so that it’s not just the driver who can make temperature settings. Also added are leather wrapping around the steering wheel and auto-dimming on the rearview mirror. On the Titanium and Sport trims, the liftgate for the trunk is hands-free, and there’s a transceiver for remote-controlling garage doors.

Dual knee, front impact, side impact, and side curtain airbags provide auto collision protection on the 2018 Edge. And those airbags are accompanied by an SOS post-crash alert system. There’s also a rearview camera to monitor reverse driving, MyKey® to configure controlled use of the car, and an electronic security system with remote keyless entry and panic alarm for deterring thieves. A keyless entry keypad is added on the SEL trim and higher.

Some of the Edge’s most formidable rivals are the Nissan Murano and the Kia Sorento. The Murano, which is one of the industry’s first midsize crossovers, is renowned for its well-roundedness; and the Sorento stands out with its optional third row. Also worth mentioning is the Hyundai Santa Fe, which has one of the most user-friendly infotainment systems.

The Sport trim of the Ford Edge is an excellent choice if you need loads of power on the road. Also, like other Ford vehicle, the Edge is blessed with many hi-tech features, and it has solid safety scores. However, you want to go with an upper-level trim to get a very good-to-great experience, since the base level underwhelms with its I4 engine and comparatively anemic stereo system. 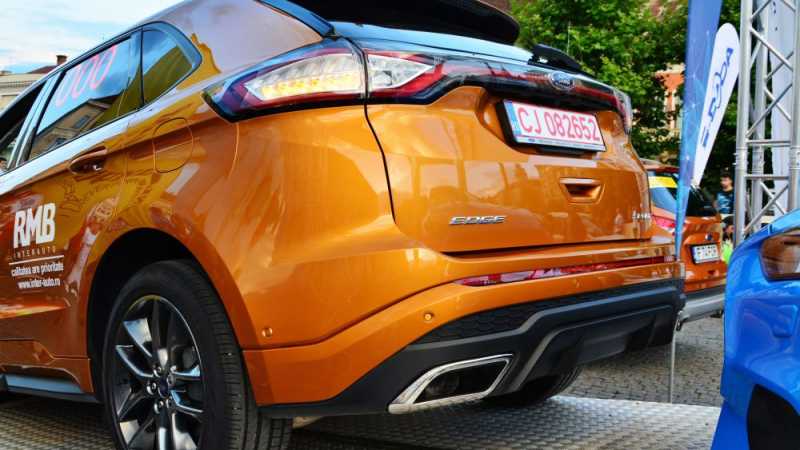