Inside the New Ford Escape

Although birthed into a crowded and highly competitive segment, the Ford Escape has managed to become one of the country’s best-selling and most highly acclaimed crossovers. The new Escape is a facelifted vehicle, midway into the nameplate’s third generation of production. Ford made additions and changes to refresh it in an ever-evolving crossover market. Now in its 2017 model year, the Escape is available as an S, an SE, and a Titanium trim.

Debuting this model year is a 1.5-liter EcoBoost turbocharged I4. Installed on the SE and Titanium, the EcoBoost engine produces 179 horsepower and 177 lb-ft of torque. True to its naming, the EcoBoost has auto start/stop technology, which means that the engine shuts down and restarts to reduce the amount of time it spends idling, thereby reducing emissions and fuel consumption. Hitched to either engine is a 6-speed automatic transmission, which comes with a SelectShift® controller if you want to take a break from fully automatic gear shifting and feel the thrill of clutch-less semi-automatic shifting.

The standard drivetrain on the new Ford Escape is front-wheel drive. However, you can swap it with the Intelligent Four-Wheel Drive system for enhancing overall performance on the road surface. Depending on the trim configuration you go with, you can get a peak fuel efficiency of 23/30 mpg and tow up to 3,500 lbs with the Escape.

Designed as a vehicle for seating up to five occupants, the new Ford Escape provides 98.7 cubic feet of passenger volume. Regarding cargo volume, you can get up to 68 cubic feet if you fold down the back seats. If you go with the SE, Ford adds 10-way power adjustability on the driver’s seat. The Titanium gets 10-way power adjustability on both front seats, and it also gets leather upholstery and a memory driver’s-seat-positioning system.

The S trim of the new Ford Escape has a six-speaker stereo system that includes an AM/FM radio tuner, a CD player with MP3 playback capability, and controls mounted on the steering wheel. Accompanying the stereo system is SYNC®, Ford’s integrated in-vehicle communications system that allows you to perform functions like playing music and making hands-free phone calls with the use of voice commands. Go with the SE trim to get the additional SiriusXM satellite radio subscription.

The Titanium stands out with its 10-speaker Sony audio system and a software- and user interface-upgraded version of SYNC® (named SYNC® 3). Also, Ford adds SYNC® Connect on the Titanium. New for this model year, SYNC® Connect enables you to remotely access certain vehicle features with your smartphone.

Choose the Ford Escape’s SE trim if you want steering wheel-mounted paddle shifters (in addition to SelectShift®) to enjoy semi-automatic shifting, as well as dual-zone automatic climate control to extend HVAC control to the front passenger. Added on the Titanium are push-button engine start, a remote start system, auto-dimming on the rearview mirror to tame lights from behind you, and a transceiver for remotely opening and closing garage doors.

Front impact airbags, a driver’s knee airbag, front seat-mounted side impact airbags, and roof-mounted side curtain airbags keep you protected from serious harm in the Ford Escape during a collision. Also on the crossover vehicle are an SOS post-crash alert system, a rearview camera for reverse driving monitoring, an electronic Curve Control system for slowing you down when coming to a curve on wet or dry payment, and Ford’s AdvanceTrac® with RSC® (Roll Stability Control™) for retaining or maintaining electronic vehicle stability.

SecuriLock® deters potential thieves, with MyKey to allow controlled use of the Escape with a configurable key. If you choose the SE or Titanium, you also get a SecuriCode™ keyless-entry keypad; the Titanium in particular comes with a perimeter alarm to further beef up the Escape’s security measures.

Praised as an all-round compact crossover SUV—it has great interior space, fuel efficiency, and projected reliability—the Honda CR-V is the chief rival of the Ford Escape. Also worth mentioning is the Hyundai Tucson, which is rightfully lauded for its exceptional safety scores and balanced handling.

An anemic base engine (even with the increased output), plus more cabin space provided by other vehicles in its class—such as the Toyota RAV4 and the Subaru Forester—prevent the Ford Escape from ascending to the very top. Nevertheless, it is one of the stronger offerings in the compact crossover market, thanks to its new turbocharged engine and loads of tech amenities, some of which are unique features from Ford. 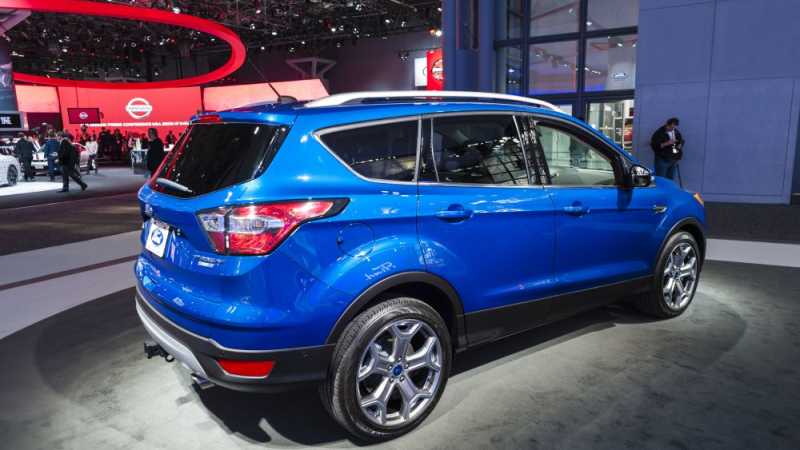