Inside the New Honda Pilot

More than a decade since its introduction, the Honda Pilot is credited for popularizing the concept of a three-row midsize crossover SUV. For the 2016 model year, the Pilot gets a complete redesign to kick off its third production cycle. It is available as an LX, EX, EX-L, Touring, and Elite trim.

For this model year, Honda increased the output of the Pilot’s 3.5-liter i-VTEC V6 engine. Now it gives out 280 horsepower and 262 lb-ft of torque. The V6 combines ECO Assist and Variable Cylinder Management (VCM) systems to boost fuel efficiency, in addition to Active Noise Cancellation (ANC) for reducing cabin noise and Active Control Engine Mount (ACM) for cutting down the amount of vibration.

Not just any ordinary drivetrain, the regular front-wheel drive (2WD) is sophisticated enough to keep you in control when driving on snow-covered roads. However, if you want to extend such control to include sand and mud—as well as increase maximum towing capability from 3,500 lbs to 5,000 lbs—swap the 2WD with the Intelligent Variable Torque Management (i-VTM4) all-wheel drive (AWD) system. Fuel economy, depending on trim configuration, peaks at 20/27 mpg.

The Honda Pilot’s three rows of seats accommodate up to eight people, with a passenger volume of 153.1 cubic feet. The second- and third-row seats can be folded down to expand the cargo volume to 109 cubic feet. Ten-way power adjustability and power lumbar support on the driver’s seat appear on the EX trim.

Upgrade to the EX-L to get additional front-seat heating capability, 4-way power adjustability on the passenger seat, and leather seat covering. For a two-position memory system on the driver’s seat, go with the Touring or the Elite. Unique features, like cooling capability and perforation on the front seats, appear on the top-level Elite.

On the EX, Honda adds tri-zone automatic climate control, a transceiver for remote operation of garage doors, an 8-inch high-resolution screen, SiriusXM satellite radio, and HondaLink to connect to the stereo head unit with your smartphone.

The Touring and the Elite get a rear Blu-ray-based entertainment system and a Honda satellite-linked navigation system. The Elite stands out with its HD Radio for digital radio service, as well as a 10-speaker 540-watt system for rich sounds and premium entertainment.

For auto crash protection, the new Pilot has front impact airbags, front seat-mounted airbags, and roof-mounted side curtain airbags that flank all rows of seats. A multi-view rearview camera is on the vehicle to optimize monitoring when it’s in Reverse. Vehicle Stability Assist with Traction Control keeps you in absolute control when driving on slippery surfaces and during bad weather conditions. And power-assisted disc brakes with ABS ensure that you stop at shorter distances and the wheels never lock up when braking.

The EX gets additional Honda LaneWatch as a lane departure warning mechanism. Added on the Touring and Elite are collision mitigation braking, lane keeping assist, and road departure mitigation systems. The Elite stands out with a blind spot monitoring system that is accompanied by a rear cross-traffic monitor. 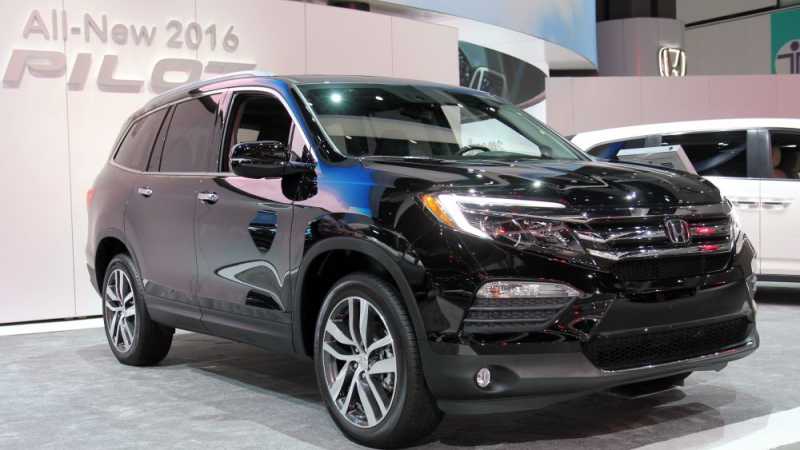