Inside the New Hyundai Tucson

The Hyundai Tucson is known for its accolades as a crossover SUV. In fact, since its inception in 2004, the Tucson has won awards from "Canadian Car" and "Consumer Reports."

The same can be said for the next generation series of the Tucson. The newest model beat the competition with recognition from "U.S. News & World Report" and from "MotorWeek" in the form of the Driver's Choice Award for Best Small Utility.

These alone should present prime reasons why the Hyundai Tuscon should be considered at the top of the list of those who wish to purchase a crossover SUV. From safety features to fuel efficiency, the vehicle offers much more for any type of driver.

A crossover SUV is somewhere in size between a larger four-door sedan and a large Sport Utility Vehicle. The Tucson's exterior length is 14 feet while the height, minus the roof rack, is five and a half feet. From the wheelbase, the Tuscon measures a midsize nine feet from axle to axle.

There are four package options for Tucson:

Hyundai provides two drive styles for the Tucson -- front wheel and all wheel.

The Tucson comes standard with a rear spoiler, solar control glass, and automatic, halogen projector headlights on the exterior. Inside the vehicle, all models provide cloth seat surfaces, power locks for windows and doors, adjustable steering wheel, and a 60/40 fold-down rear seatback for additional storage options.

Regardless if it's the SE or the other three Tucson models, performance is considered a priority. The SE provides drivers with a two-liter, four-cylinder engine for pickup without losing fuel economy. the Sport, ECO, and Limited models all come with a Turbo GDI engine that generates 175 horsepower. Each vehicle comes standard with a six-speed automatic transmission and active cornering controls on models with all-wheel drive.

Hyundai ups the safety quotient in the Tuscon with a few unique features. The Lane Departure Warning alerts the driver, and may wake them up, when they begin to drift into another lane without signaling. To avoid drifting, the Tucson has Lane Keep Assist to lock the vehicle in one lane. Additional advanced safety features are Blind Spot Detection and Automatic Emergency Braking. Front passenger airbags and a rearview camera are standard on all Tucson models.

This side of the Tucson is far from basic as all models provide:

All operations are built into the steering wheel for easy access and safety. On the Limited, standard features also include Infinity and HD Premium Audio, Android Auto and Apple Car Play which work with those models of smartphones and eight-inch touchscreen navigation.

The 16-gallon tank of the Tucson provides nearly 500 miles of driving. Both front wheel and all-wheel drive models offer 30 miles per gallon on highways and an average of 25 miles on city streets. Specifically, the ECO model offers slightly more efficiency on the city and highway.

How It Stacks up

When it comes to crossover SUVs, the Tucson is normally compared to the two other most popular models on the market -- the Nissan Rogue and the Toyota Rav4. Putting price into consideration, the Tucson offers the lowest starting price for its standard model over the Rogue and Rav4. The Tucson also ranks higher than the other two crossover SUVs when it comes to interior leg and headroom.

There are many pros to the Hyundai Tucson including its new exterior design, well-lit console controls, extended leg room, and above average fuel efficiency over other crossover SUVs. Other pros include free roadside assistance and limited warranty for 5 years/60K miles and a 10 year/100K powertrain warranty. The cons of the Tucson are few, with the biggest complaint being the lack of cargo capacity. Another con is a lack of engine power, especially in the 175hp model. Drivers have mentioned that drive power feels adequate compared to other models in the Tucson's class. 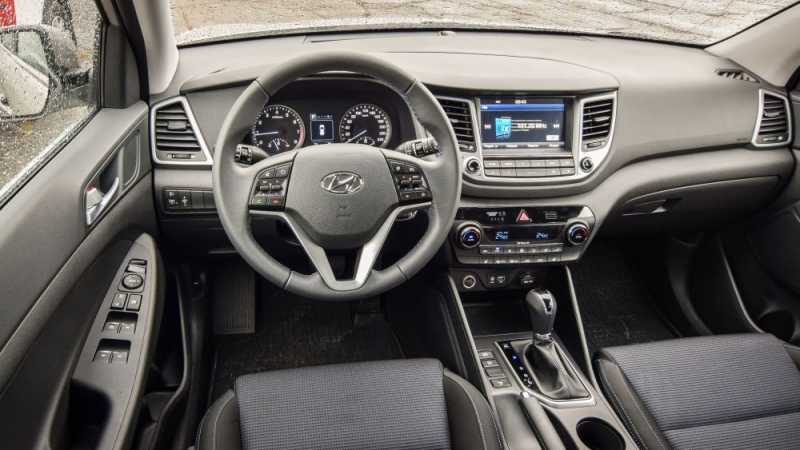