Inside the New Jeep Wrangler Unlimited

"It's a Jeep Thing," has become a dominant slogan seen and heard across the country and it's no wonder, with the ever-popular Jeep that has held a steady pace in the front of the pack for SUV lovers. Since the early 2000s brought the expansion to include the four-door model you now know as the Jeep Wrangler Unlimited, Jeep has taken the world by storm with its time-tested classic vehicle that intrigues housewives and tough guys alike. Let's take a closer look inside the latest version: the new 2017 Jeep Wrangler Unlimited.

First and foremost, you and every Jeep enthusiast will be ecstatic for the much-anticipated debut of the first-ever model to include LED headlights and fog lamps. This long-awaited and much-loved new amenity is the key component in the virtually untouched 2017 edition. This feature comes as a standard specification for the Sahara and Rubicon versions, but is still an available option for the Sport and Sport S as well.

These LED lights demand some attention as they shine like stars with a 90 percent increase in brightness when compared to the incandescent lamp. They also contribute to an added 63 percent low bar yield.
From the former halogen lights, the new ones lower power consumption by up to 67 percent. For these updated, round 7 inch LED lamps, providing their improved driving vision also increases the price by an additional $595.

Additionally, there have been some other updates to the '17 Wrangler Unlimited. The optional Cold Weather Group presents a great bundle for the Sport S and Rubicon trims. Within this package, you enjoy heated seats, remote start and all-weather mats to make winter a little more bearable. Also, this power convenience group offers an engine block heater and boasts 17 inch BF Goodrich K02 tires.

And here is perhaps one of the most asked questions when a new Jeep hits the scene: what colors are available? Along with the standard black, bright white, granite crystal, red, rhino and silver are:

The interior color options also take on an update besides the traditional black with black/dark saddle brown and black/dark olive as options. The trims available for 2017 include the Sport, Sport S, Sahara and Rubicon respectively.

2017 packages include Freedom, Hard Rock and Willy's Wheeler. Here are the details of each one: 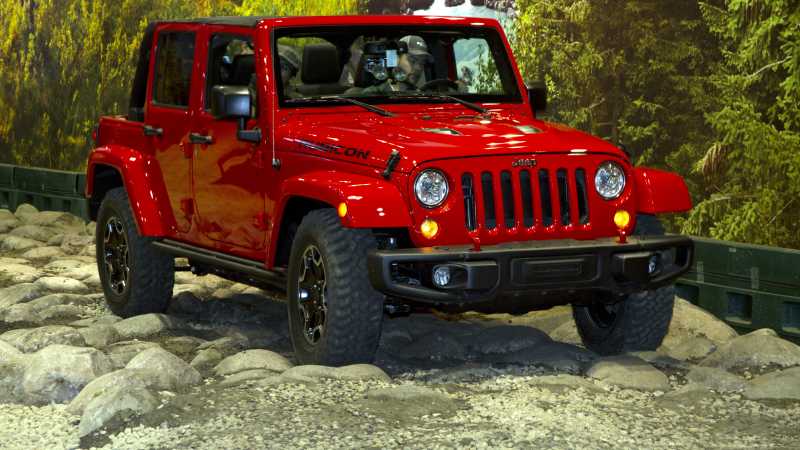 In regards to safety, the 2017 Jeep Wrangler Unlimited provides front and side airbags. These are in conjunction with its durable body-on frame design. There are three skid plates housed on the underbody to provide added protection for the oil pan, transfer case and gas tank.

Popular specifications and features include a V6 with a fuel efficiency of 16/20/18 for city/highway/combined. It has a 3,500 pound towing capacity and houses a five-speed automatic engine designed by Mercedes-Benz. This five-speed automatic replaces the outdated former four-speed one.

Cargo space increases from 46.4 cubic feet to 82 cubic feet when the rear seats are in the folded position. And although there have been some upgraded interior components, the rugged appeal is still evident with the ability to hose out the models with cloth seats.

While some cons of the Jeep Wrangler Unlimited are without a doubt its lack of comfortable ride, average handling and excessive noise heard inside the cabin, the unmatched appeal of this classically designed utility vehicle more than makes up in style for what it lacks in comfort. With such a "fun-to-drive" intrigue to get behind the wheel, you won't look twice at the featured out-of-date technology on the dash or the mediocre on-road handling that no doubt affects its less than impressive crash scores.

On the other hand, there are more than enough pros to keep the Jeep Wrangler at the top of the list for the most popular SUVs. Its off-road capacity to take the world by the horns is unprecedented. Period. When attempting to compare this Wrangler, there simply isn't anything close -- it is honestly in a class all by itself.

This stand-alone class continues to showcase iconic design regardless of its old-school mechanics. Some photos of the 2017 model have shown only the rear of the Jeep which exposed new axles, restyled exhaust and other minor changes that work together for a more stable driving experience.

...there simply isn't anything close — it is honestly in a class all by itself.

Finally, the priciest trim is the Rubicon, which includes all the already-listed features along with extra interior improvements. 32 inch tires are housed on 17 inch alloy wheels to make the Rubicon stand out a little more than normal. It also has the following features:

Performance speaks for itself with the ability to jump from 0-60 in 6.6 seconds and a top speed of 99 mph. Adding to the unique features of this rugged icon is the new Chrysler 3.6-liter Pentastar V6. The Pentastar takes the place of the 3.8-liter boat anchor and it gives 40 percent more power and improved fuel efficiency.

Most of the modern SUVs on today's market are constructed from a front-drive car platform, but that is not the case for the Wrangler. It continues to utilize a body-on frame system designed for the coveted off-roading appeal unmatched on the market.

From rock crawler to carpooling kid-hauler, the head-turning classic design of the Jeep Wrangler continues to hit the mark with its newest 2017 version. Its compact design and rugged appeal work together to fuel its longevity. The Jeep Wrangler Unlimited's dominance continues to reign as the lone ranger in a field of prissy utilities that simply just can't compare.