Inside the New Kia Sorento

Still early into its third production cycle with its 2017 model year, the latest Kia Sorento continues the tradition of providing customers with a rugged yet stylish build, plus loads of amenities. The base-level L is targeted at budget-conscious buyers, and the LX trim is a slightly spruced-up version of it. The EX functions as the mid-level trim, the SX trim level is the sporty version, and the fully loaded SX Limited V6 is the absolute top-tier edition.

Normally, the new Kia Sorento is loaded with a 2.4-liter inline 4-cylinder (I4) engine that puts out 185 horsepower and 178 lb-ft of torque. However, the EX is the only one without it; instead, it uses a 2.0-liter turbocharged I4 with 240 horsepower and 260 lb-ft for increased acceleration and fuel efficiency. Available for swapping with the 2.4-liter engine on the LX, EX, or SX trim level is a 3.3-liter 24-valve V6 that churns out 290 horsepower and 252 lb-ft of torque.

Regardless of engine, the new Sorento comes with a 6-speed automatic transmission with a Sportmatic™ shifter to simulate more control over gear shifting. For increased traction and driving control, you can switch the front-wheel drive (FWD) with the Dynamax All-Wheel Drive system, provided that you go with the LX, EX, or SX.

Fuel economy peaks at 21 mpg in the city and 28 mpg on the highway, depending on the powertrain and drivetrain configuration.

Designed and classified as a midsize crossover SUV, the new Kia Sorento provides standard seating for up to five adult occupants. However, if you go with the V6 engine-equipped LX, EX, or SX, there’s a third-row seat to bring up the occupant capacity to seven. (It’s optional on the regular LX.) Overall, passenger volume is measured at 154.2 cubic feet.

The new Kia Sorento has an audio system that includes an AM/FM tuner, CD/MP3 player, and SiriusXM satellite radio. On the LX, Kia adds a 4.3-inch color touchscreen for displaying information. With the EX, there’s Android™ Auto and Apple CarPlay® for controlling the stereo system’s head unit with your smartphone. The SX trim level replaces the standard six-speaker system with a 10-speaker Infinity® surround sound system with HD radio.

At the base level, you can expect a host of comfort and convenience features on the new Sorento, such as steering wheel-mounted controls, a drive mode select system, and Bluetooth connectivity.

If you upgrade to the LX, Kia throws in a rearview camera for monitoring your driving when it’s shifted to Reverse.

The SX Limited V6 stands out with a HomeLink® transceiver for remote-controlling garage doors, as well as a 360-degree, surround-view camera to replace the regular rearview monitor.

Front impact, side impact, and side curtain airbags provide auto-crash protection on the new Sorento. There’s also electronic stability and traction control for ultimate command of the vehicle, four-wheel disc brakes for shortening stopping distances, and hill start assist control for preventing rollback when moving from a stop on a steep hill.

The EX trim level and above has a sensor-based rear parking assist system to aid the rearview/surround-view monitor; the EX V6 gets additional blind-spot detection and rear-cross traffic alert. The SX Limited V6 tops them all with unique features like smart cruise control, lane departure warning, forward collision warning, and autonomous emergency braking.

The Kia Sorento’s main competitor is the Nissan Murano, which bears the distinction of being one of the very first midsize crossovers. Additionally, it’s a perennial best-seller. Other noteworthy competitors include the Chevrolet Traverse and the Honda Pilot, which, like the Sorento, offer third-row seating.

Attributes like a solid line-up of engines, premium styling and interior feel, high level of projected reliability, and a generous list of safety features make the new Sorento one of the most valuable midsize crossover SUVs around. On the downside, the base engine is unimpressive, and pricing can climb quickly when adding options.

Due to its varied trim combinations, the new Kia Sorento has a very wide starting manufacturer’s suggested retail price (MSRP) range. It goes from $25,400 with the L to $43,900 with the SX Limited V6. 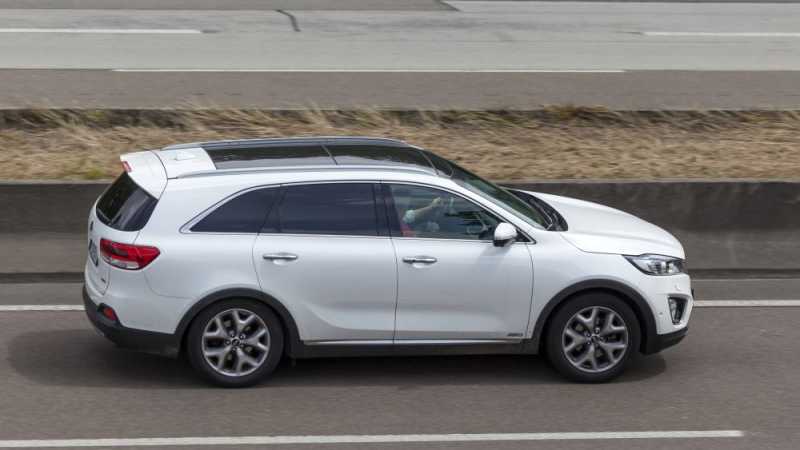