As the 2018 model year gets ready to roll into action, the Ford F-series super duty pickups have some exciting new things to offer. Ford has set out to develop a line that is definitively the ultimate heavy-duty truck on the planet. The trio includes the F-250, F-350, and F-450 as its headlining super duties.

These aluminum-bodied titans feature 925 lb.-ft. of torque, allowing a towing capacity of 32,500 pounds. That’s enough power to handle almost any job imaginable, and puts this line far ahead of their competitors. These models also have the latest and greatest technology available for both safety and comfort.

This full-featured line allows you to build the truck of your dreams, whether your truck needs to be a castle fit for a king, or a contractor basic model. The best part about this line is that you are in control and can design the perfect truck for your needs and wishes. Let’s take a closer look at these models!

Ford introduced the aluminum body and fully boxed steel frame in 2017. Last year also saw a revised Powerstroke diesel engine that offers boosted horsepower and torque for improved performance. Another performance feature that Ford introduced was an adaptive steering system that helps with low-speed maneuvering and driver control when traveling at higher speeds.

Additionally, Ford improved several safety features which carried from the 2017 Super Duty line to the new 2018 models. The tire-pressure monitor and Trailer Reverse Guidance system make towing a significantly safer task. This advanced system uses multiple cameras and advanced steering guidance technology to make driving with a hitch easier than ever before. Ford also introduced driver assisted adaptive cruise control, a collision warning system with automatic braking support, and a blind spot monitor that even works with trailers. These features were so popular that Ford decided to keep them for the 2018 model.

The 2018 F-series offers an optional Sync 3 infotainment system with a user-friendly interface. The system is packed with features including Apple CarPlay and Android auto. The system features a touchscreen, digital gauges, and a plethora of accessory outlets. The digital readouts allow you to get real-time traffic and weather updates, while also featuring voice recognition technology, top-of-the-line navigation, and Bluetooth connectivity.

Fuel economy is a tricky subject with this line of vehicles. Super Duty pickups are not known for their fuel efficiency, and to further exacerbate things, the EPA doesn’t even rate the fuel economy of vehicles that are this heavy. In independent tests, the F-250 with the SuperCrew option got 17 mpg highway. This Super Duty model performs slightly worse than the Chevy and GMC competitors, but offers slightly more power. The F-250 is a great truck if you want something lighter of Ford’s 2018 F-series trucks.

The F-350 is Ford’s midrange truck, falling somewhere between the F-250 and F-450 in terms of performance. This model combines heavy duty performance and drivability of both, with only a few minor updates from the 2017 model.

Unsurprisingly, the F-350 offers the same safety and entertainment features as the F-250 and F-450. And just like the other Super Duty models, it’s also offered with various cab and bed options, including the SuperCab and Crew Cab that Ford enthusiasts are fond of. Additionally, the F-350 features the same six trim levels as its siblings, including the base XL, XLT, Lariat, King Ranch, and Platinum.

As with the F-250, this model sacrifices fuel efficiency for power. However, in independent tests, it received an average 17 miles per gallon highway.

The F-450 offers many of the optional from its lower-priced models and makes them standard. This model comes with an upgraded turbo diesel powertrain that features Ford’s gigantic 6.7-liter V-8 diesel engine. It can produce 440hp and more than 925 lb.-ft. of torque. It also features an efficient and powerful six-speed Torqshift automatic gearbox. This truck has a payload capacity of 5,320 pounds, which makes it Ford’s most powerful yet, allowing it to pull gooseneck trailers with ease.

The F-450 may be the ultimate truck for getting things done, but it doesn’t skimp on safety or comfort either. This truck feels like a luxury class vehicle on the inside, offering all the same safety and entertainment features as the other models. The biggest addition to this line for 2018 is a new limited-edition trim package. This term Package is loaded with upscale amenities such as leather seats in two-tone, a headliner made from micro-suede, and ash wood trim. The exterior for this limited-edition package offers grille designed to make it stand out and a satin finish tailgate trim.

As with the other Super Duty models, no official fuel information was available on this model because it has a vehicle weight of over 8,500 pounds. Based on 2017 data, consumers can expect this model to average roughly 14-17 mpg. Of course, these estimates will drop based on the weight of your load and whether you are traveling uphill or not. This model is made for power, not fuel economy. 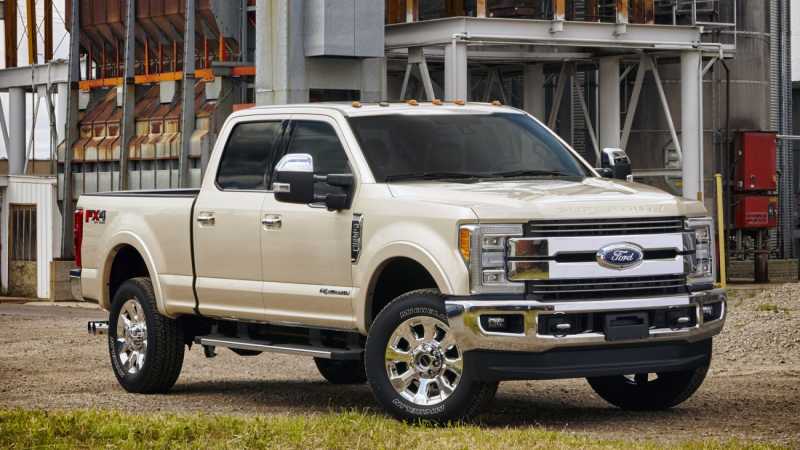