The Best Crossover SUVs in the UK for 2017

Crossover vehicles now pose a serious threat to the saloons' place as the family haulers of choice. Their popularity has grown because they offer near-SUV practicality with car-like handling.

Crossovers are classed according to luxury and performance levels. They are further grouped according to their sizes - compact, midsize, or full-size crossovers.

Below are four noteworthy crossovers in the UK market that drivers might consider, in no particular order.

The latest Cayenne is everything that one would expect from a Porsche crossover: it is stylish, powerful, and luxurious, while not compromising on safety standards.

It is sold in a mind-boggling number of trim levels, with the addition of the Cayenne Platinum and the Cayenne S E-Hybrid Platinum as new 2017 limited-edition models. The base Cayenne is priced at about £48,000, but the price shoots to almost £130,000 for a fully loaded Turbo S.

Both sporty and indulgent, the 2017 Cayenne offers a broad range of trims, from a green-cred plug-in hybrid to a performance-oriented turbo V8-suited variant. All engines are linked to an eight-speed automatic transmission, AWD being standard.

The base Cayenne gets approximately 7.7 km/l in the city and 10.2 km/l on the highway.

The 2017 Porsche Cayenne is stout and well-constructed. It also comes with a solid set of safety features for enhanced vehicle security and occupant protection.

The infotainment system is centred on a 7-inch touch-screen interface integrated with smartphone-like gestures and Apple CarPlay. Bluetooth connectivity and a 10-speaker audio system come standard.

The Cayenne offers more performance ratios than its sibling, the Macan. It also provides a more reasonable starting price tag and better reliability ratings than the Range Rover Sport.

The 2017 model year extends the Range Rover Evoque's lineup by adding the all-new Evoque Convertible. It is produced in three body styles: a two-door model, a four-door model, and a two-door convertible model.

Under the bonnet of the 2017 Range Rover Evoque is a turbocharged 2.0-liter four-cylinder engine returning 240 horsepower and 250 lb-ft of torque. The engine powers the standard all-wheel using a nine-speed automatic transmission. Drivers can select suitable settings for specific trail and road conditions thanks to Land Rover's Terrain Response system. The Evoque makes a zero to 60 mph dash in 7.2 seconds, which is the class average.

The coupe and hatchback receive an 8-inch touchscreen while the convertible gets a new 10.2-inch display. The infotainment system incorporates the InControl Apps suite and is linked to an 11-speaker audio system.

It offers more creature comfort and personalization options than the Land Rover Discovery Sport and the Audi Q5, and comes at a lower price than the Porsche Macan.

The 2017 BMW X6 is a sleeker spin-off of the 2017 BMW X5. It is one of the most driver-centred crossovers on the UK market. It seats five and is available in three trim levels.

All trims get an eight-speed automatic transmission. The RWD sDrive35i and the AWD xDrive35i both employ a 3.0-liter inline six-cylinder engine that delivers 300 hp and 300 lb-ft of torque. They also get steering-wheel mounted shift paddles.

The BMW's iDrive 10.2-inch touchscreen interface with a touchpad controls the infotainment system. The X6 comes standard with a nine-speaker sound system, USB and auxiliary audio inputs, a CD player and HD radio.

Compared to its rivals, such as the 2017 Mercedes GLE-Class and the 2017 Land Rover Range Rover Sport, the new X6 is by far the most fun-to-drive. However, it is less utilitarian.

The new Jaguar F-Pace is a practical eye-pleaser that drives and handles surprisingly well. It is sold in five trims and comfortably seats five adults.

Paddle shifters, AWD, an eight-speed automatic transmission, and hill-start assist are all standard.

The 35t AWD models benefit from a 3.0-liter supercharged V6 engine that pumps out 340 hp and 332 lb-ft of torque in all but the S and First Edition, where it cranks out 380 ponies.

The InControl Touch 8-inch touchscreen interface is linked to a CD player and an 11-speaker Meridian sound system. It comes with a media player, USB port, and an auxiliary audio jack. It also offers Bluetooth phone connectivity and media playback. 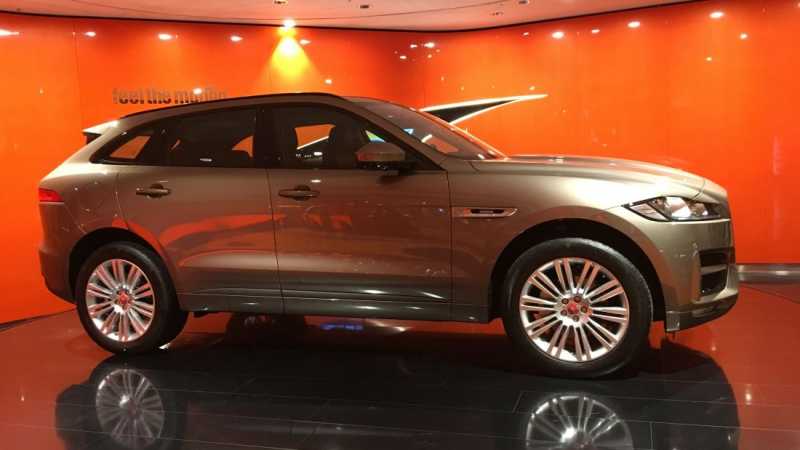