The Best Crossover SUVs from Acura

If you’re in the market for a new crossover SUV, don’t miss Acura’s 2018 lineup. Scroll below to learn more about Acura’s offerings:

While the three-row Acura MDX is a popular choice among growing families, the compact Acura RDX’s value makes it just as appealing. Both models promise to offer an engaging driving experience. Let’s take a closer look at these premium crossovers.

By winning the AutoWeb Buyer's Choice Award for Best Luxury SUV, the 2018 Acura MDX proved that it has no trouble keeping pace with the competition. Journalists rave about the crossover’s versatility. Not only does the new MDX deliver an incredibly luxurious ride, but it also packs plenty of performance. Meanwhile, high predicted reliability scores give the Acura MDX a key advantage over rivals like the BMW X5 and the Mercedes-Benz GLE. Although the MDX — starting at $44,200 — is a great SUV, some people will prefer the mechanically similar Honda Pilot’s lower price. In regard to exterior styling, the Acura MDX has a refined look that appeals to a lot of drivers. Optional 20-inch Berlina black alloy wheels add a touch of sportiness.

The base power source for the MDX is a Honda-built 3.5-liter, V6 engine. It pumps out a competitive 290 horsepower and 267 pound-feet of torque. There’s plenty of muscle under the hood. When you hit the gas, the MDX’s nine-speed automatic transmission reacts immediately. Acceleration is strong enough to trigger a sense of excitement. Opting for the MDX Sport Hybrid enables you to experience an even more impressive blend of power and efficiency. Acura tuned its hybrid engine to develop 321 horsepower and 289 pound-feet of torque. While the regular MDX is rated by the EPA to return a combined 23 mpg, the Sport Hybrid model will deliver a combined 27 mpg. Unfortunately, premium unleaded fuel is required throughout the lineup.

When equipped with Acura’s exclusive Super Handling AWD system, the MDX transforms into a more engaging driving machine. When taking curves, you’ll instantly notice the big crossover’s nimbleness. Activating the steering system’s sport mode gives you more control. Although the MDX is a blast to drive on the street, it’s not built for serious off-road adventures. However, AWD models do perform very well in snowy conditions.

In terms of luxuriousness, the 2018 Acura MDX ranks among the class leaders. Quality is likely to exceed your expectations. You can definitely look forward to experiencing all-day comfort. It’s extremely easy to obtain a relaxing driving position. Ventilated front seats are optional. Although the MDX provides great space in its first two rows, most adults will find the third-row seat to be a rather tight fit. Several high-tech features come standard, including an updated infotainment system with Apple CarPlay and Android Auto. While the standard backup camera works well, the optional 360-degree parking camera will help in busy areas. Among the MDX’s available features, the rear-seat entertainment system will appeal to kids the most. They’ll be able to stay occupied watching movies and playing video games.

Safety is never a concern with the 2018 Acura MDX. It received a five-star overall safety rating from the NHTSA. Top Safety credentials from the IIHS further highlight the crossover’s superb crash protection. All versions of the new MDX benefit from a standard AcuraWatch safety package. Automatic emergency braking and lane-keep assist give you an enhanced level of confidence on the road. Although adaptive cruise control comes standard as well, it tends to be a bit too sensitive in real-world driving. To obtain blind-spot monitoring, you must purchase the optional Technology package.

The 2018 Acura RDX is among today’s best compact luxury crossovers. Many car reviewers consider it to be a genuine bargain. Starting at $36,000, it’s around $5,700 less expensive than the 2018 Audi Q5 and $6,200 cheaper than the 2018 Jaguar F-Pace. You'll also benefit from RDX's bulletproof reliability, which means fewer trips to the repair shop. For good reason, Consumer Guide chose the Acura RDX as a 2018 Best Buy. Although the two-row RDX isn’t as large as the MDX, there’s plenty of space for a family of five.

Like its larger sibling, the RDX comes equipped with a potent V6 engine. An output of 279 horsepower and 252 pound-feet of torque makes it one the strongest base engines in the class. You’ll also enjoy the crossover’s incredibly smooth, six-speed automatic transmission. While competitors like the twin-turbo BMW X3 may offer quicker acceleration, few drivers will complain about its brisk 0-60 time of 6.2 seconds. Fuel economy stands at an economical 20 mpg in town and 28 mpg on the highway. Opting for all-wheel drive slightly lowers the RDX’s efficiency.

Families love the Acura RDX’s relaxing interior. Its supportive seats and quiet cabin will make you feel right at home. While even the standard upholstery is nice, leather upholstery gives the cabin a more upscale appearance. Despite the crossover’s compact dimensions, you’ll have plenty of space to stretch out. Your tall friends will certainly appreciate its impressive amount of rear-seat legroom. When loading cargo, the RDX’s wide rear hatch will come in handy.

If you don’t want to spend any extra money, the Acura RDX’s list of standard equipment should keep you happy. Some of the highlights include a media player interface, Bluetooth connectivity, and a multi-view backup camera. Drivers can also take advantage of the standard Maintenance Minder feature, which helps you keep track of scheduled maintenance. If you desire Apple CarPlay and Android Auto smartphone integration, you’ll need to spend an extra $3,700 on the Technology package. GPS-linked climate control and a 10-speaker ELS sound system also come with the package.

In the event of a crash, you can trust the 2018 Acura RDX to safeguard your family. Its NHTSA five-star overall safety rating should give you a strong sense of protection. An effective braking system also helps drivers to avoid danger. If you desire advanced safety innovations such as automatic emergency braking and lane-keep assist, opt for the AcuraWatch Plus package. Meanwhile, blind-spot detection and rear cross-traffic alert are included in the more expensive Technology package. 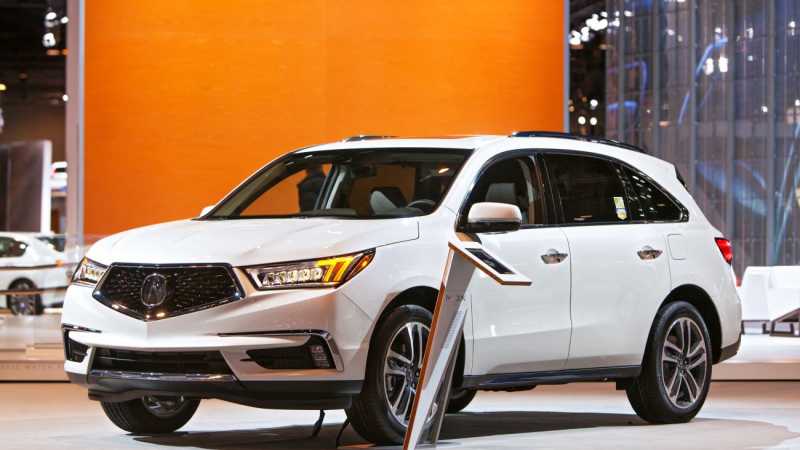