Rising quickly from relative obscurity, the SUV crossover has come to dominate the auto market over the last decade. In many ways, the crossover is the ideal modern vehicle. It offers enough passenger and cargo space to be family-friendly, respectable fuel efficiency numbers and typically outstanding tech integration in a car-like package that provides enough power and agility for an enjoyable driving experience.

No matter your needs, 2017's top SUV crossovers offer something for everyone. If you're in the market for a new vehicle, you owe it to yourself to place these outstanding crossovers at the top of the list.

The compact crossover market has been flooded with excellent options in recent years, but few can match the 2017 Mazda CX-5's top-notch combination of value and performance. One look at the five-passenger crossover's aggressively sculpted front fascia and sporty body lines - products of Mazda's "KODO – Soul of Motion" design philosophy - and it's clear that the CX-5 has inherited the same genes as the manufacturer's most compulsively drivable sports cars. If you're searching for an affordable crossover that drives like a sport compact but remains capable of handling the whole family, your search may very well end right here.

The real story, however, is the tremendously responsive handling. Thanks in part to Mazda's innovative G-Vectoring Control and SKYACTIV systems, the CX-5 offers precise steering, road-hugging stability and a ride that's smoother than expected.

While the bold design approach doesn't translate quite so well to the interior, it's still an impressive and surprisingly well-appointed cabin. You'll find plenty of room up front, and the rear seats offer enough space to comfortably accommodate children and smaller adults. The cargo area is slightly expanded over previous years, and Mazda claims the volume level inside the cabin has been reduced by about ten percent.

The Mazda Connect infotainment system sports all the bells and whistles you'd expect of a mid-range crossover, including integrated Android Auto and Apple CarPlay support and convenient multimedia and climate controls. Considering a base price tag that hovers around $23,000, it's hard to find a fault with the tremendous value of the 2017 Mazda CX-5.

Taking a quick peek inside the 2017 Audi Q7, one thing is immediately apparent: this crossover was built to haul people. With a cavernous passenger compartment that looks as if it's capable of transporting a small army, you and your passengers certainly won't want for personal space. You'll find second-row folding seats with a 35/30/35-split and 50/50-split power folding third-row seats, allowing for a wide variety of seating and storage configurations to make the most of all that room. High-quality leather upholstery, generous cushioning and excellent soundproofing make the Q7 extremely comfortable even on long road trips, and Audi's versatile, user-friendly MMI infotainment system is your conduit to a feature-rich tech environment that compares favorably with its class competitors.

However, don't think that opting for a large, luxurious three-row crossover means you need to sacrifice an enjoyable driving experience. On the contrary, the Audi Q7 is deceptively nimble for its size, feeling low to the ground and displaying none of the body roll or understeer that is typical of larger SUV crossovers.

Optional features like quattro all-wheel drive and the Adaptive Chassis only add to the fun, delivering outstanding handling and ride quality that leaves the Q7 feeling more like a German sports car than a 2.5-ton people hauler.
Under the hood, Audi's venerable supercharged 3.0-liter V6 generates 333 horsepower and 325 pound-feet of torque, with enough low-end muscle to give a delightfully snappy throttle response.

As an IIHS Top Safety Pick+, the 2017 Q7 also boasts an impressive safety record. In addition to the typical safety features, the Q7 also comes standard with Audi pre sense basic. This system is triggered when it senses the driver has taken evasive actions to avoid a collision, automatically tensioning the seatbelts, closing the sunroof and windows and priming the braking system. Active lane keep assist, blind spot monitoring, a night vision camera and other advanced safety and driver assist features are also available as options, making the Q7 one of the safest family vehicles on the market.

With its unbeatable fusion of safety, passenger capacity and performance, the 2017 Audi Q7 rightfully belongs on any list of 2017's top SUV crossovers.

The BMW X3 has been out in the world for nearly a decade without a full redesign, but it's by no means outdated. In fact, the mid-sized X3 - positioned between the smaller entry-level X1 and the larger, luxury-oriented X5 - remains one of the best crossovers on the market.

As you'd expect from the German automaker, the 2017 BMW X3 is an exercise in luxury. The cabin is replete with luxurious touches, with quality materials adorning virtually every surface and careful craftsmanship evident throughout. The cabin is exceedingly well-designed ergonomically, and there's a great deal of space for up to five adult passengers. Cargo space, too, is among the best in the compact crossover class, making the BMW X3 a great choice for families big and small.

BMW's iDrive interface is a breeze to navigate thanks to a gorgeous high-resolution display and integrated touchpad, and the ability to simultaneously sync with two phones at once is an impressive and convenient feature not found in some of its competitors.

The X3 lives up to BMW's "Ultimate Driving Machine" tagline.

Ignoring any modifications, the X3's base 2.0-liter turbocharged four-cylinder engine provides satisfyingly brisk performance thanks to its 240 horsepower output. If you’re more efficiency-inclined, a 2.0-liter turbocharged four-cylinder diesel offers an estimated 30 combined miles per gallon.
Even the brawny 3.0-liter turbocharged V6, which produces 300 horsepower and 300 pound-feet of torque, checks in at a relatively generous 21 combined miles per gallon. All engine options have power to spare, making the X3 one of the most agile and responsive a crossovers you’re likely to find.

Though its ride quality isn't quite as silky and gentle as some full-size luxury SUVs, it's a tremendously enjoyable drive that doesn't sacrifice on passenger or cargo room. When it comes to luxury and performance, the 2017 BMW X3 is a clear and undisputed winner. 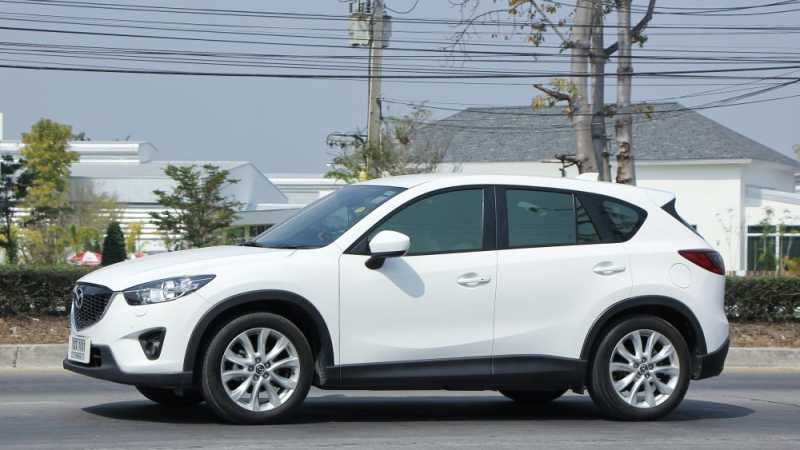