Driving a minivan is a great option and choice for any family or people that want to have additional seating capacity or cargo space. While minivans have been popular for decades, they continue to be improved with new stylish features, higher-performance engines, and better amenities that make them safer and more fun to driver.

When you are looking for a new minivan to purchase in 2019, there are many options to consider. These six impressive 2019 models have a strong combination of style, performance, safety, and overall functionality.

One of the most popular minivans on the road each year is the Honda Odyssey, which is well known for its great interior features, safety, and engine performance. The Odyssey has a starting MSRP of just over $30,000 for the base trim. All trim levels for the 2019 Odyssey come equipped with an automatic transmission, front-wheel-drive, and a V6 engine that produces about 280 horsepower. At the same time, fuel efficiency is around 24 mpg on a blended basis.

The Odyssey comes standard with some good tech and safety features including the rearview camera, a five-inch touchscreen display, two USB ports, and a seven-speaker audio system. Those that are looking for a more fully-equipped minivan will need to purchase one of the higher trims that typically start around $40,000. With these trims, you can get smartphone connectivity, a more impressive eight-inch display, and the Honda Sensing safety package that includes pre-collision braking, forward collision warning, adaptive cruise control, and lane keep assist.

The overall advantage of the Odyssey is that it provides you with a comfortable minivan with plenty of space at a reasonable price. One disadvantage is that many of the more popular features for tech and safety require you to purchase a more expensive trim.

The 2019 Toyota Sienna is another popular minivan option that comes standard with a V6 engine. What separates the Sienna’s V6 from the competition is that it produces nearly 300 horsepower. Furthermore, the Sienna can seat either seven or eight passengers and drivers have the choice of either FWD or AWD with all trim levels. With the powerful engine, a driver can still expect to get a fuel efficiency of at least 23 mpg when coupled with FWD or 22 mpg when upgraded to the AWD drivetrain. The 2019 Sienna starts with an MSRP of just over $31,000.

There are several great tech and safety features that come with the Sienna. For the first time ever, the 2019 model year comes standard with Apple CarPlay and Amazon Alexa connectivity. Some other standard features include five USB ports, a seven-inch touchscreen display, a Wi-Fi hotspot, lane keep assist, rearview camera, and a pre-collision warning system with automatic brakes. All these safety features are part of the Toyota Safety Sense P system, which comes standard at all trims.

The one disadvantage of the 2019 Sienna is that its starting MSRP is a bit higher than the competitors. However, the more powerful engine, AWD capabilities, and expansive suite of tech and safety features make it more than worth the additional price.

The 2019 Chrysler Pacifica is a popular minivan that starts with a low MSRP of just $27,000. The Pacifica is largely unchanged from the prior model year as it continues to come with the base V6 engine option that produces about 287 horsepower. Similar to other minivans, the Pacifica comes with seating for seven and an FWD drivetrain with all trim levels. Drivers of the Pacifica can expect to get 28 mpg when driving on the highway and 19 mpg when driving in the city.

The Pacifica comes with several great standard features including a seven-inch touchscreen display, smartphone integration, and UConnect Access, which will allow you to track, start, or unlock your vehicle through the use of your phone. Some standard safety features include a rearview camera, blind spot monitoring, and rear traffic alert.

Overall, the Pacifica is popular with consumers due to its lower MSRP and good fuel efficiency. Furthermore, many consumers consider it to have a very comfortable interior with plenty of great features, even at the base trim level. One disadvantage is that its 140 cubic feet of max cargo space is slightly less than the competition.

Another minivan produced by Chrysler is the Chrysler Pacifica Hybrid, which is a great option for someone that is looking to get the best fuel efficiency possible. With this minivan, you will get a hybrid engine that still produces an acceptable 260 horsepower. The strongest selling point of the minivan is the great fuel efficiency which is around 32 mpg on a blended basis. Furthermore, you have an electric-only range of 33 miles before you have to use gas. Due to the higher fuel efficiency and electric capabilities, the Pacifica Hybrid has a higher base MSRP of around $40,000.

Along with the better fuel efficiency, the Chrysler Pacifica Hybrid comes with some additional features standard. While those that get the Chrysler Pacifica Hybrid will receive the same Uconnect and smartphone integration as the base Pacifica, they will also enjoy a larger touchscreen display, a better audio system with HD and satellite radio, and some additional safety features including front parking sensors, automatic parking assist, and lane departure warning.

The best-selling points of the Chrysler Pacifica Hybrid are the great fuel efficiency and improved standard features. However, the expensive MSRP could put it out of reach for some buyers.

The 2019 Kia Sedona has a starting MSRP of $27,200, which makes it one of the most affordable minivan options. The Sedona has a base V6 engine option that produces around 276 horsepower and provides a driver with a blended fuel efficiency of around 22 mpg. The 2019 model year has been improved to include a new eight-speed automatic transmission and new tech features.

The 2019 Sedona comes standard with a good package of entertainment and safety features including a seven-inch display, USB ports, smartphone integration, and a four-speaker radio system. Some standard safety features include the rearview camera, lane departure warning, and parking sensors. There are also many additional safety and entertainment features available as upgrades.

The affordable MSRP and quality interior features continue to be strong selling points for the Sedona. Two knocks against are the lower fuel efficiency and slightly weaker engine performance compared to the competition.

The 2019 Dodge Grand Caravan’s low MSRP and good engine performance are both very good selling points for the minivan. The main con is the lack of standard safety features that are included with competing minivans. 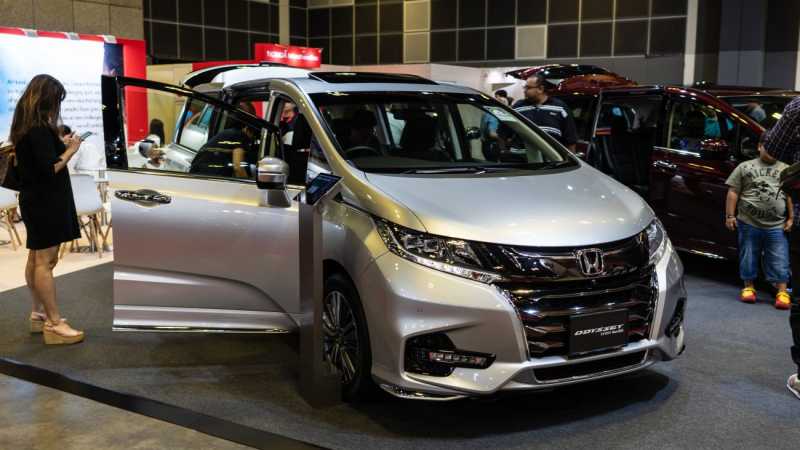