A lot of today’s drivers enjoy the versatility of a compact luxury SUV.

Not only do the latest models offer an array of new safety technologies, but they also promise to deliver a high level of performance. Let’s take a look at the top luxury compact SUVs arriving in 2018.

Before you decide on a new luxury compact crossover, be sure to test drive the 2018 Cadillac XT5. Not only does the new XT5 offer a slew of premium features, but it also packs a lot of power under the hood. Elegant exterior styling makes this crossover an even more rewarding choice. With a starting MSRP of $41,000, the Cadillac XT5 matches up well with the segment’s other top contenders.

All versions of the XT5 come strapped with a potent 3.6-liter, V6 engine. A total output of 310 horsepower and 271 lb.-ft. of torque makes the XT5 one of the most powerful crossovers in its class. A quick 0-60 time of 6.4 seconds also proves that the XT5 can move out in a hurry. Precise handling and a responsive automatic transmission give the XT5 an extra degree of driving excitement. Fortunately, this crossover’s inspiring performance doesn’t come at the expense of fuel efficiency. Front-wheel-drive models are rated to return a competitive 19 mpg in the city and 26 mpg on the highway. The AWD version is nearly just as economical.

There is a lot of passenger room inside the 2018 Cadillac XT5. It easily accommodates up to five people. In terms of overall comfort, the new XT5 ranks among the class leaders. You will also have access to several high-tech features. Cadillac’s standard CUE infotainment system is now easier to use than ever before. Some of the other standard components include a 4G Wi-Fi hot spot, a booming Bose sound system, and GM’s award-winning OnStar communications system. Boasting a five-star safety rating, the XT5 also proves to be an extremely secure family vehicle. Several advanced driving aids are available, including automatic braking and a vibrating Safety Alert driver’s seat.

Over the past few years, Alfa Romeo has introduced a number of exciting vehicles to the North American market. The all-new 2018 Alfa Romeo Stelvio’s edgy styling and sporty driving dynamics make it one of the hottest luxury compact crossovers on the market.

Although the Stelvio is a SUV, it has the heart and soul of an Italian sports car. Its turbocharged four-cylinder engine churns out a potent 280 horsepower and 306 pound-feet of torque.

An eight-speed automatic transmission enables you to extract the optimum performance out of the engine. When tested on the track, the crossover clocked a remarkably quick 0-60 time of 5.4 seconds. In terms of fuel economy, you can look forward to getting up to 28 mpg.

A lot of technology is available for the new Alfa Romeo Stelvio. Located within the gauge cluster, a high-resolution display enables drivers to quickly access information while on the road.

Although the base audio system will keep most drivers happy, the optional 800-watt Harman Kardon system delivers concert-like sound quality.

To ensure outstanding stopping power, all trims come equipped with an advanced electro-mechanical braking system. Some of the other key safety innovations include adaptive cruise control, blind-spot monitoring, and autonomous braking. The MSRP for the base Stelvio is $41,995.

Known for its sharp handling, expect the 2018 BMW X3 to remain near the top of the segment. Although the X3 has not been totally redesigned, it does boast a number of upgraded features. With an estimated MSRP of $40,000, the new X3 proves to be a strong value.

For the 2018 model year, BMW decide to discontinue the X3’s optional diesel engine. The good news is that the new X3 now develops more power. BMW tuned the turbocharged four-cylinder engine to deliver a healthy 248 horsepower and 258 pound-feet of torque. While even the base X3 is quick, you can step up to the high-performance M40i trim. Its boosted V-6 engine offers a thrilling 355 horsepower. According to BMW, the M40i version can hit 60 mph in a jaw-dropping 4.6 seconds.

The 2018 BMW X3 has some of the best features in the class. It now offers Gesture Control technology, which enables you to adjust the infotainment system by simply making hand motions. BMW also introduces a new head-up display that boasts much improved graphics. Regarding safety, innovations such as an automatic brake-drying feature come standard. Optional driving aids consist of pedestrian detection, lane-keep assist, and cross-traffic alert.

Audi decided to completely redesign the 2018 Q5. Because of its long list of improvements, the Audi Q5 certainly deserves to be mentioned among the best. Fortunately, buyers won’t be forced to spend a lot of extra money. It has a competitive MSRP of $42,475.

Although the Q5 comes equipped with the same turbocharged four-cylinder engine, it has been reworked to offer an extra 32 horsepower. Upon stepping on the accelerator, you will immediately feel the engine’s 252-horsepower output. Drivers will also benefit from the Q5’s new seven-speed transmission. A 25-mpg combined fuel economy rating makes the Audi Q5 even more rewarding to drive. While the standard suspension has been tweaked to deliver a softer ride, the SUV still offers confidence-inspiring handling. For the folks who desire more driving excitement, Audi offers a racy SQ5 model. Its turbocharged V-6 engine delivers an addictive 354 horsepower.

One of the Q5’s interior highlights is its optional Virtual Cockpit. It features a high-resolution digital display, which is fully customizable. You can also take advantage of Audi’s updated MMI infotainment system. This year, the Audi Q5 comes equipped with a greater number of safety technologies. When cruising around the city, the low-speed automatic braking system will help keep you out of trouble. Blind-spot detection and adaptive cruise control are optional.

For good reason, the all-new Land Rover Range Rover Velar has created a great deal of anticipation. It has an aggressive appearance that sets it apart from the crowd. A sedan-like ride gives drivers yet another reason to choose the new Range Rover Velar.

Land Rover gives you three potent engines to choose from. While the diesel engine develops 177 horsepower and a crushing 317 pound-feet of torque, the turbocharged four-cylinder engine produces an equally as impressive 247-hp, 269 pound-feet of torque. To obtain the most performance, opt for the supercharged V-6 engine. It pours out a stout 380 horsepower and 332 pound-feet of torque. A 31-mpg fuel economy rating makes the diesel engine your most efficient option. Meanwhile, the powerful V-6 engine tops out at 23 mpg. Like most Land Rover models, the new Range Rover Velar comes standard with a robust 4WD system. No other competitor proves to be a more skilled off-road performer.

On the inside, the 2018 Land Rover Range Rover Velar surrounds you with an array of upscale features. A high-definition driver display and a 23-speaker Meridian Signature Sound System come standard on the top-of-the-line First Edition trim. Children will also love the SUV’s twin-screen entertainment system, which can be easily connected to a smartphone. All the latest safety innovations are available, including an Adaptive Speed Limiter feature. Prices for the new Range Rover Velar start at $49,900.

You can rank the new 2018 Volvo XC60 among the most technologically advanced SUVs in the world. Aside from the XC60’s eye-catching styling, it is also remarkably safe and practical. Most car shoppers will find the XC60’s MSRP of $42,495 to be extremely reasonable.

With a total output of 250 horsepower, even the base engine proves to be a worthy choice. However, the T6 engine’s 320-horsepower production promises to really get your adrenaline pumping. Volvo also offers a fuel-sipping hybrid engine. While the hybrid model is rated to deliver a combined 26 mpg, the other models can return at least 27 mpg on the freeway.

Every trim in the lineup comes standard with high-tech goodies such as a backup camera and a LCD instrument cluster. Volvo’s Sensus infotainment system is certainly a cut above the competition. It enables you to easily locate your favorite apps. Several world-class safety innovations are offered. If you fail to notice a vehicle in the next lane, the advanced blind-spot monitor can steer you away from danger. 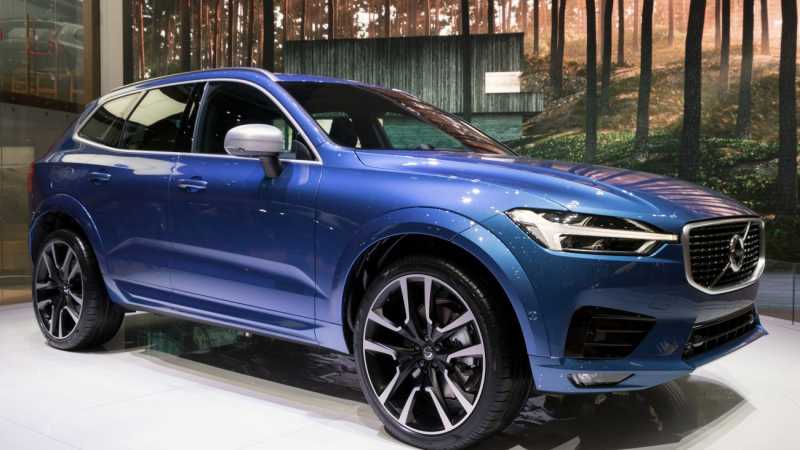